UPDATE: Man shot in chest on South Bend's northwest side 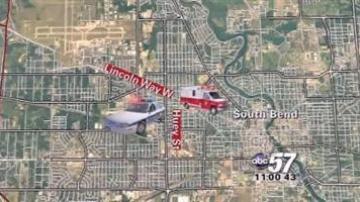 SOUTH BEND, Ind. – The Saint Joseph County Metro Homicide Unit is investigating another shooting on the city's West Side after police found a man in his 20s lying on the ground, bleeding from the chest.

It happened around 10 p.m. at Lincoln Way West and Huey Street. Police said the man was rushed to the hospital and in critical condition. He underwent surgery late Thursday night.

Detectives said they are unsure exactly if the man was shot on Huey Street.

"That’s what we’re still trying to figure out. Obviously, there were some items in the street that may indicate he was shot at this location but we’re not certain yet at exactly what happened,” said Lieutenant Abe Wells, Assistant Commander for the Saint Joseph County Metro Homicide Unit.

Detectives found articles of clothing and a cell phone on the street.  But, neighbors told ABC 57 their neighborhood is used to sounds of gunfire, and until officers arrived, it was a quiet night.

“I don’t think he was probably shot here. Because we always hear them.  We always hear gunshots, three blocks down. Didn’t hear anything,” said Robyn French, who’s lived in the neighborhood for seven years.

“I had been up for awhile. And like she said, you can hear it, especially since it was like in his chest and stuff,” said Hunt.

Wells said he is sick of responding to shootings on the city’s west side.

“You know, it seems like every other week we’re getting called out here for a shooting, so people just need to start resolving their differences in a different way than shooting each other,” said Wells.

Metro Homicide cleared the scene around 2 a.m. on Friday.