UPDATE: Man speaks out about the alleged sexual assault at Mishawaka High School 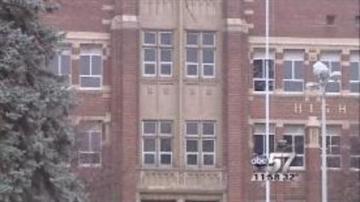 MISHAWAKA, Ind.--  There was a sense of normalcy at Mishawaka High School as the annual Al Smith Classic Wrestling tournament got underway.

"There's lots of great action in there," said Kevin Taylor, a former Mishawaka wrestler. "There's lots of guys with state titles under their belts. There's no place better for wrestling during the Holiday break than the Al Smith Classic."

But among the cheering fans and proud parents, attorneys and news crews filtered through the crowds--a subtle reminder of the controversy surrounding Cavemen wrestling.

John Curtiss was at the event to watch his grandson wrestle.

"[The controversy] confused me because Mishawaka has always been a straight forward team," said Curtiss.

His confusion, like most Mishawaka fans, stems from the accusations that surfaced two weeks ago when a wrestler reported he was sexually assaulted by five of his teammates during the 2010 season.

"I was a little bit hesitant to believe what happened," said Curtiss "and then i talked to my grandson and he said he was in the room when this was going on and a lot of it did not happen."

According to Curtiss and his grandson, the incident began when a wrestler went to show his insurance card to Coach Darrick Snyder. But he couldn't find his wallet.

"So they put the wrestling room on lock down until he found it," said Curtiss. "and eventually they found this one kid had his wallet in his backpack... I assume these five had stuff stolen from them. Once they found out who did it, they just tore into him."

Curtiss would not comment on what the five teammates actually did to the alleged victim, but he was adamant that his grandson said many of the accusations were not true.

"He was there at the time and he said a lot of the stuff that's being said is not true."