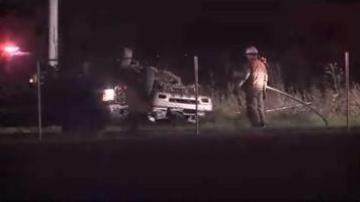 WARREN TWP., Ind. -- An accident between a South Shore Train and a car left one dead Sunday night.

The crash happened near Pine Road Crossing near Ardmore Trail in Warren Township around 8 p.m. The South Shore train left the Chicago Millennium Station at 4:43 p.m. (5:43 Indiana time) with the final destination of the South Bend Regional Airport. The train was traveling eastbound at 70mph with 200 people on board.

Police say the driver was headed southbound in a tan Mercury Mountaineer on Pine Road when he collided with a eastbound South Shore train and was killed. The victim has been identified by police as 22-year-old Ryan Voreis.

Police said it appeared that all crossing arms and red light warning signals were working properly at the time of the crash.

It is unknown why the driver drove into the path of the train.  Investigators were informed by South Shore officials that each train is equipped with an exterior camera, and video may be available to assist in their investigation.

No one on the train was injured.  Investigators interviewed the train conductor and engineer. The train was deemed safe, and it was allowed to continue to the airport.

A vigil is set to be held for Voreis Monday at 7 p.m. at the train tracks where the fatal accident happened.