Update on a gun being found on suspect in UP Mall 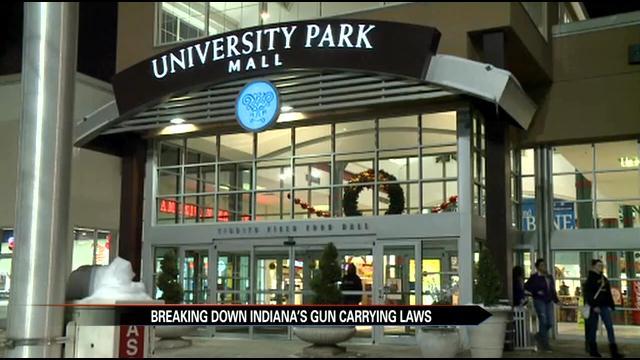 On Friday evening, a male suspect was being detained for allegedly being involved in a fight at University Park Mall in Mishawaka when police found a loaded handgun on him.

The state of Indiana is, for the most part, considered "pro-gun", but that doesn't mean that just anyone can carry.

There are many places in Michiana, such as Chipotle, Starbucks, and Target that are gun-free.

University Park Mall is owned by Simon Malls, making them a gun-free property as well.

That, however, does not mean a person can't walk into the mall with a gun.

Any person with a state issued license to carry a handgun can do so, as long as they are not on federal property or at a school.

Therefore, if someone were to carry a gun into a "gun-free zone" with a permit, that person has not violated the law. The person can be asked to leave the property. If the person refuses to leave, they will not be arrested for taking their gun onto the property, but may be arrested for trespassing.

In the cell phone video obtained from Friday night's incident in U.P. Mall, you can hear the police asking the suspect if he had a permit to carry the handgun found on him, and the suspect appears to shake his head "no".

Indiana statute says "A person should not carry a handgun in any vehicle or on or about the person's body without being licensed".

Minors are unable to legally obtain a license to carry a handgun, meaning that, if the suspect in this case is indeed a minor, he has clearly broken the law.

Some local gun owners believe that University Park Mall's policy on carrying a handgun may be hurting their business.

"I choose not to visit those businesses because, like I said earlier, if someone is going to shoot someone or cause some trouble, they are going to be more likely to go somewhere where they know there are no guns. I am a concealed weapon carrier myself, and I hate that I have to, but with the world that we live in, you know?" said local gun owner Ed Keim.

You can visit IN.gov for more information on gun laws in Indiana.

UPDATE: Police say 18-year-old Denzell Parahams is the man in the video. He has been charged with Altering a Handgun ID after it was found that the serial numbers were scratched off of the firearm found in his possession.