UPDATE: One man in custody after shots fired at police 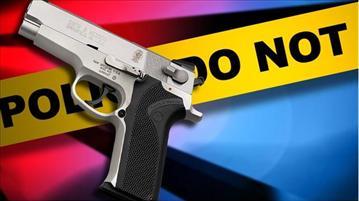 SOUTH BEND, Ind. -- Several officers, including the SWAT team were called to South Bend's West Side after a man started shooting at police.

Right now that man is behind bars. Officers said he started shooting at them during a car chase turned foot pursuit.

It happened just before 4 p.m. Tuesday near Brookfield and Ford Streets. Police said the car chase started at home in the 2500 Block of West Ford Street. A man called police saying someone was at his house threatening him and that he was the same person that had shot up his car just a few days earlier. When police arrived, he jumped in his car and ran from police.

It was anything but a normal day for employees at Calpro Fence Co. Inc. "They found three slugs in the roof of our building," said Calpro sales associate Joel.

Workers were finishing up for the day when all of a sudden they heard several gunshots. Moments later, they saw a man duck into an alleyway and run towards a vacant house near the corner of Ford and Polaski Streets.

That is when Joel flagged down an officer, "I just told him that he came this way and he never came out on this block and that we thought he was in the yellow house right there."

Police, then, called in the South Bend SWAT team and that is when officers found the man hiding in the vacant house. Officers found the man just two blocks from where he crashed his car into a neighbor's lawn during the car pursuit, which then turned into a foot chase with police.

"During the chase, the subject that the police officer was chasing began firing shoots at police officers," said Metro Homicide Lt. David Wells.

After police arrested the man, they immediately turned their attention to finding the gun. "We have been out here combing the yards and the alleys in hopes of finding that gun. We don't want to leave a handgun out here for any of these kids to find," said Wells.

Officers didn't find the gun outside, but they think the suspect may have hidden it inside the vacant house or possibly his car.

Police said they are not releasing the name of the suspect until he is formally charged.