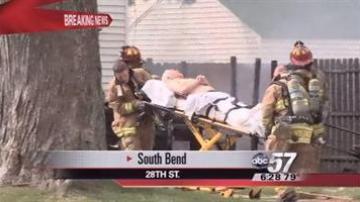 ST. JOSEPH COUNTY, Ind. – A man was hospitalized with what appeared to be life threatening burns, according to Clay Township firefighters, Thursday evening.

Investigators at the scene of the fire believe the man was burning a pile of debris near a wooden fence at his home on Hepner Street, when he lost control of it.

The fire spread to the fence, quickly burning through it, then into a neighbor’s yard where it crept toward a home on 28th Street.

Inside the home were two young girls, waiting for their parents to come home.

One of the girls noticed smoke filling the window on the side of the house the fire was approaching. When she started to walk toward the window she could feel the intense heat of the fire through the wall.

At about that time, Erica Hogie, 7, was playing in the front room of her house across the street. She saw the fence was fully engulfed and screamed for help.

Erica’s mother, Judy, ran outside while dialing 911. When she saw a neighbor also on the phone, she asked if the girls were out of the house.

They were not, so Hogie and the neighbor went to the front door to get them.

With the children safe, other neighbors began trying to stop the flames from catching the house on fire; but the garden hose they wanted to use was not hooked up to a water source.

Instead they began moving anything flammable away from the burning yard.

When firefighters arrived, the professionals took over, but were quickly stymied.

The flames had travelled up a power pole next to the fence and were burning through the electric lines.

Sparking and exploding, the live wires kept firefighters at bay for a few minutes, but eventually they were shut off and the fire was extinguished before the home could be badly damaged.

Afterward, the man firefighters say set the fire was taken to the hospital with burns they called life threatening.

He was flown to a burn hospital in Fort Wayne a short time later, according to people living in the neighborhood.

The man is in his early 80’s according to neighbors, and Thursday evening they were concerned about his condition.