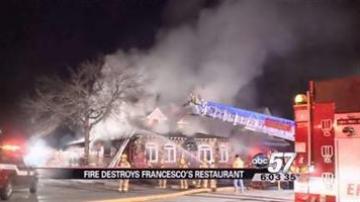 MISHAWAKA, Ind. --- Francesco Catanzarite Jr., the owner better known as Frank watched as flames tore through his restaurant, “He looked pretty broke up about it, he was crying, him and his wife were very upset.” Laura Sears said Frank was practically her neighbor, he was always at restaurant right next to her house, “This has been his baby, he just paid off his property and was so proud of it.”

Catranzarite’s son Joe got out to the building just before seven o’clock Monday night to see his family’s restaurant for the very first time since the fire. “My dad’s been here for almost thirty years now, I grew up in this place,” he said. Catanzarite said the whole family is in shock, he’s not sure if they will try to reopen the restaurant, right now they’re still trying to figure out what happened. “I don’t know how it could have started unless someone set it, but why?” Catanzarite asked.

Investigators were out at the scene on Lincolnway West near Logan Street all afternoon, “We always have ideas but right now we cannot approve definitely what it is that caused the fire.” Mishawaka Fire Marshal George Shafer removed a tin can full of material collected inside the restaurant, but would not say exactly what it was, “I cannot disclose that, just a sample we took out of the building.” Shafer later passed that can onto the Fire Marshal with the Indiana State Police to be taken to a lab for testing, “Well if there were any types of substances that may have caused the fire to ignite or burn.”

Shafer said before an official cause is determined, they must get the test results back from the Indiana Sate Police and those tests could take several weeks to complete.

The Italian restaurant was destroyed Monday morning after flames ripped through the old building for hours.Crews tried to attack the fire from the inside of the building but had to pull out because of the heavy smoke.

Assistant Fire Chief Mike Talbot said with the significant smoke and heat damage, the building is a total loss.“Anytime you have to go defensive it’s [the building] is pretty much toast on the inside,” said Talbot.
Talbot said crews have used the newer Mishawaka engine three times, including Monday morning, when firefighters used a two-aerial setup to knock down the flames.
“It is kind of rare to have a two-aerial setup. But, this building is an old building and it’s kind of been chopped up and remodeled several different times, which causes us a lot of problems to extinguish the fire,” said Talbot.
Talbot said the building is around 100 years old.
Thick plumes of smoke billowed out of the building for nearly three hours.
Investigators were inside of the restaurant around 7 a.m., trying to figure out how the fire started.
Lincolnway West was blocked off but was reopened to traffic around 6:40 a.m.
No one was hurt.
Share this article: