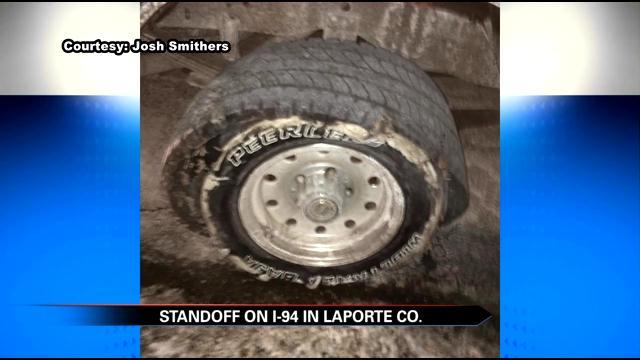 A police pursuit across state lines on Friday night ended in LaPorte County on Interstate 94.

Police said the suspect fired shots at Illinois State Troopers during the pursuit, but no one was seriously injured.

Captain Michael Kellems with the LaPorte County Sheriff's Department was lead negotiator during the standoff and he said he was able to talk the suspect down before the situation escalated.

Kellems said, “This gentleman was very desperate; he was armed with a hand gun the entire time that we talked to him. He was armed and he would point it at police during different opportunities. And he refused to put it down.”

Kellems said over a dozen law enforcement agencies were involved and the suspect was able to avoid stop sticks in Lake and Porter counties.

Kellems said, “We were told that this started over possibly an armed robbery where some shots were fired and we were also told during the course of the pursuit that he had fired shots at the Illinois State Police.”

Kellems said the suspect pulled over near the 40A exit towards South Bend at Mile Marker 38 on I-94 and SWAT team was called in.

Kellems said, “There came a time when he got close enough to the front lead vehicle that several of the tactical officers were able to disable him with bean bag rounds.”

Kellems said he characterized the incident as outstanding police work, because officers stuck to to the negotiation tactic instead of using lethal force.

Kellems said, “We worked very hard to bring this to a successful conclusion through negotiation and as a result of that we were successful!”

The chase caused major backups on I-94.

Driver Josh Smithers said he was traveling near the Portage area when he said several drivers ran over stop sticks and busted their tires.

Smithers said, “I got out of the traffic and all of a sudden I started hearing 'thump thump thump' so I pulled over and my tires were obliterated.”

Press Release Update at 6:18AM:

A man who had allegedly fired shots in a Walgreen's store in Broadview, IL lead police on a chase into Indiana and was taken into custody on I-94 near the 39 mile marker without any shots fired.

At approximately 7:52 p.m. (CST) ISP units from Lowell District continued a pursuit of a suspect wanted out of IL for allegedly firing shots in store. The pursuit was started in Broadview, IL and continued southbound down I-294 to eastbound I-80 into Indiana where Troopers Curtis Jones, Nathan Wolfe, Khari Walton and Davonne Barlow continued pursuing the white 2004 Ford Expedition across eastbound I-80. Stop sticks were deployed several times as the Expedition continued across I-80 onto I-94 without success.

At approximately 8:26 p.m, LaPorte County Sheriff's Department again attempted to deploy stops sticks at the 36 MM EB but the Expedition avoided them, also. Troopers had slowed EB traffic so it was trailing the pursuit by about one mile when the Expedition started to slow then stopped on the shoulder near the 37 MM which is near the Michigan City exit. EB traffic had been stopped at the 36 MM to keep them out of Harm's Way. The Expedition then started traveling EB again at a very low speed before coming to a stop again at the 39 MM. The vehicle then turned around going WB in the EB lanes of I-94 for a short distance before coming to a stop.

Units from Berrien County MI had the WB I-94 traffic stopped at the 40 MM. The suspect in the Expedition refused commands from law enforcement officers to exit the vehicle. At approximately 9:00 p.m, Captain Michael Kellems a negotiator from LaPorte County Sheriff's Department arrived on scene to assist in talking with the suspect in the Expedition. At approximately 9:03 p.m, the suspect exited his vehicle with a hand gun in his hand. He then put the gun to his head then put his hands up but not surrendering the gun all the time standing in the middle of I-94.

At approximately 9:34 p.m, the LaPorte County Sheriff's Department SWAT Team arrived to also assist while negotiations continued. At approximately 10:10 p.m, the suspect was struck with a non-lethal weapon and was taken into custody with no injuries to police or the suspect. He was transported to a LaPorte hospital to be evaluated and then was incarcerated in LaPorte County Jail.

The suspect has been identified as Vincent J. Toliver, 34 from Madison, WI. He also had a last name of Berry. He was charged with Possession of Stolen Property and Resisting Law Enforcement. The hand gun he had in his possession was allegedly stolen out of TN. Further charges may be pending as the case is still under investigation.

For any questions about the incidents that occurred in Indiana, contact Sgt. Kim Riley at the number listed. For inquires on what took place in Illinois, contact the Broadview Police Department or the Illinois State Police.