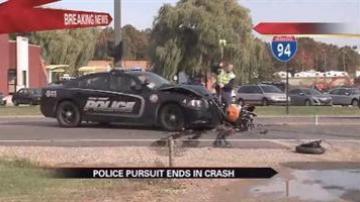 COLOMA, Mich. - A motorcyclist fleeing from a Michigan State Police trooper collided with a Coloma Police squad car Tuesday afternoon at the Coloma exit off I-94 in Berrien County. The motorcyclist was airlifted to the hospital.

Police say a Michigan State Trooper clocked 26-year-old James Meisner of Kalamazoo on his motorcycle travelling at approximately 140 miles an hour on I-94 in Van Buren County near Lawrence.

When the trooper tried to pull Meisner over, he refused to stop.

The chase ended when Meisner got off I-94 at the Coloma exit and hit the Coloma Police squad car, driven by 52-year-old Mike Prince, head-on around 3 p.m.

“It looks like the motorcycle went over the double yellow (lines) and hit the Coloma car,” said accident reconstructionist Jim Campbell with Michigan State Police.

According to police Prince was dispatched to assist MSP with the chase. Prince was heading towards I-94 when Meisner hit the squad car at estimates near 90 miles per hour.

Meisner was airlifted to Kalamazoo. His injuries are not considered life-threatening.

Prince was released from the hospital and is on paid administrative leave pending the investigation.