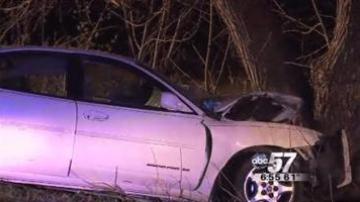 SOUTH BEND, Ind. -- We now know the name of a South Bend man who died in an overnight crash.

Police said that 30-year-old Michael Chavez veered off the road and struck a tree on Tuesday.

The accident happened at 11:51p.m. on Kern Road, east of Ironwood Avenue.

The St. Joseph County Sheriff's Department said that after crashing into the tree, Chavez was trapped, and had to be extracted from his car by the fire department.

Chavez was then transported to Memorial Hospital, where he was pronounced dead.

Police tell us that Chavez was originally from Illinois.