UPDATE: Police release name of man who led them on a pursuit 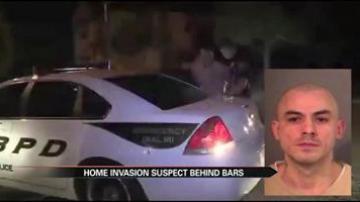 SOUTH BEND, Ind.-- A man wanted for several outstanding warrants was captured in South Bend on Saturday after police said he forced his way into a home in the 500 block of Irvington Avenue.

Police said when they got to the scene the man jumped out the window and fled down an alley.

36-year-old Dennis Webb was eventually found and arrested for resisting police, residential entry, and at least one outstanding warrant in Marshall County for failure to appear in court.

Neighbors said they are shocked that it happened on their street.

Christian Pierson said, “There was a loud boom and then some people drove off in a Jaguar, and then about 20 minutes later there was a younger man who started beating down on an older gentleman and then, I don’t know if it was a girlfriend, but she walked out and tried to stop it.”

Police said the event on Saturday was just a continuation of an ongoing feud between Webb and the homeowner.

Police said this man also tried to force his way into the home earlier in the day on Saturday.

Pierson said he heard that Webb tried the same thing several weeks ago too.