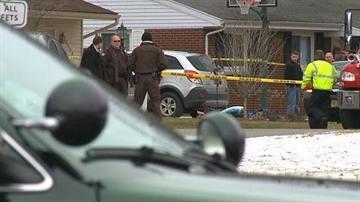 The officer shot the suspect Monday afternoon. He was wanted on multiple arrest warrants.

It happened around 3:30 p.m. Crews were sent to 19450 Wedgewood, right along the state line, in St. Joseph County.

St. Joseph County police said that Berrien County police recognized a suspect at a hotel who was wanted on multiple warrants stemming from home invasions and burglaries. The suspect was considered to be armed and dangerous.

Police tailed the car, but the suspect realized he was being followed. He pulled off into the Pay'n Pikit parking lot on the corner of SR 933 and Wedgewood drive.

He got out of his car, and started walking into the neighborhood to the east.

Police attempted to cut him off and arrest him. That's when officers said the suspect pulled a knife on them! According to police, the suspect attacked an officer and cut his hand with the knife.

According to St. Joseph County police, Berrien County officers fired several shots. Police said the suspect continued fighting even after he was shot.

The suspect was transported to Memorial Hospital, according to police, in critical condition.

The suspect who, as of Monday night, had not been identified died.

The officer involved in the shooting has also not been identified.