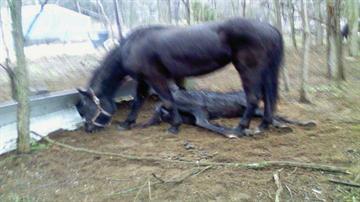 MONGO, Ind. – ABC 57 News has an update on a story we first brought you on Sunday.

Kelli Lusk and her rescue group had a complaint that horses on a plot of land near Mongo appeared to be severely malnourished.

According to Lusk, the renter of the property will not allow anyone to drive onto it and remove the horses that appear to be severely malnourished.

Photos of one of the horses on the ground concerned Lusk the most. Sunday afternoon, the owner of the horse told Lusk, she didn’t have access to a truck to get the horse out of there. Lusk told ABC 57, a horse cannot survive on its side for more than five hours.

ABC 57 followed up with Sheriff Terry Martin in LaGrange County. Sheriff Martin said that the malnourished horse died of worms. The deputy made this determination on the scene.

Sheriff Martin said that no charges have been filed and no wrongdoings have taken place. Adequate food and water was found for the horses at the scene.