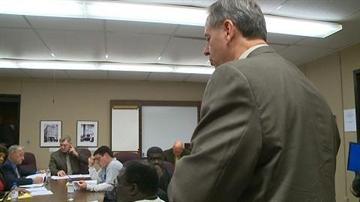 SOUTH BEND, Ind. – A vote on whether to purchase the Chase Tower Building garage never made it off the table Monday. Mayor Steven Luecke asked the Common Council to postpone their vote until next year.

Less than 10 minutes before a special meeting of the Common Council was scheduled to begin, Mayor Luecke asked the Community Economic Development committee to table the deal his administration had worked out with Satish Gabhawala.

Gabhawala would have received $5.7 million from the City for the parking garage of the Chase Tower Building, if the council approved the deal.

At the committee meeting, Luecke said his administration was not prepared to answer questions that had risen about the potential developer, Gabhawala.

Council President Derek Dieter sent out a memo earlier in the day with information regarding Gabhawala’s civil disputes. It also raised questions about Gabhawala’s ability to raise money for the project because he has one property in foreclosure in Harvey, IL., and owes more than $130,000 in taxes on it.

Gabhawala is said to have rights to a loan that would allow him to purchase the 25-story building in downtown South Bend, but had to exercise those rights by the end of the day Monday; that’s according to Common Council member Henry Davis, Jr.

Davis was not happy about the results of Monday’s special meeting. He set the meeting up in hopes of being able to get a deal done by the end of the year, in order to prevent tenants in the building from moving out.

“Had the council been a little bit more aggressive and assertive in getting a little more information, those questions could have been answered previous to this meeting,” said Davis.

Gabhawala was not at Monday’s meeting. According to his wife, who was in South Bend, he is currently out of the country.

The information about Gabhawala’s current and past business practices may not make much difference anymore.

Mayor-Elect Pete Buttegieg released a statement to ABC 57 News Monday night that read, "The Chase Tower is part of the downtown business fabric and I will be exploring new options to address the future of the building. We need responsible owners who will make appropriate investments to improve the building and benefit downtown."

Since the matter has been tabled until January 9, 2012, the new City Administration will have to decide what to do about the deal and then present their plan to a new council at their very first public meeting.