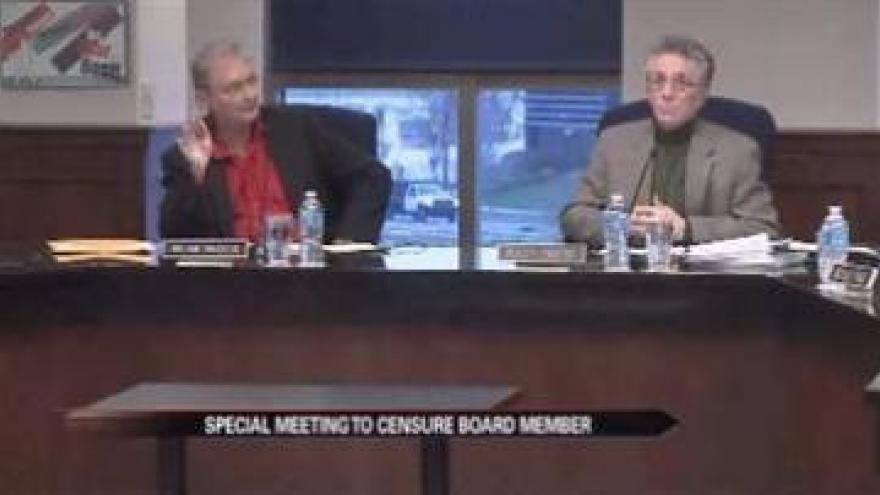 SOUTH BEND, Ind. -- Political ploy. That is what outraged community members are calling the South Bend school board's latest decision to censure one of its own.

Friday, during a special meeting, school board member Bill Sniadecki was stripped of his title as the school board's vice president.

Snaidecki's censure comes just three days after his re-election to the board.

School Board President Roger Parent was the driving force behind this decision. It comes after Sniadecki publicly criticized Parent and other board members for holding an illegal executive session.

Parent said Friday, he had no choice but to do this because Sniadecki has repeatedly violated the school corporation's policies, as well as state law.

Sniadecki maintains those accusations are absolutely false and that this is merely a personal attack for speaking out.

Angry community members, like school bus driver Pat Mayfield, said board members had their minds made up well before holding the meeting and hearing public input. "Totally disgusting, I think it is just terrible what they did to him," said Mayfield after the meeting.

Dozens of people filled the South Bend Community School Corporation's board room as Parent introduced the only item on Friday's agenda - to censure school board member Bill Sniadecki.

"It was all about politics and and Parent just wanted to have his way," said school bus driver Carolyn Miller.

According to the documents, Parent accused Sniadecki of intimidating school corporation employees and being a bully.

"The last 30 days have been focused on trying to make accusations against me for doing my job," said Sniadecki Friday.

In Parent's latest statement, released Friday, he claims although unpleasant, it was his duty to censure Sniadecki.

Parent when on to call Sniadecki's misbehavior despicable and something the board of trustees can no longer tolerate.

Sniadecki maintains the accusations are totally false and the community seems to agree. Just three days ago, he was re-elected to his position on the board.

"That board member works for the people, for the public. They went against our wishes and I think that is wrong," said Mayfield.

Several people from community lined up to address the other board members in Sniadecki's defense.

The meeting got so heated that at one point two individuals in attendance were kicked for harsh comments directed at Parent.

Despite the overwhelming show of support for Sniadecki, all the board members present voted to censure him except one.

A decision that outraged community members at the meeting.

Sniadecki says his censure is disappointing because it is taking way from more pressing issues the board should be focusing on.

"Again, focus on the kids, that is our whole job here. I don't answer to the board members, I answer to the public," said Sniadecki.

In fact, Sniadecki says he is now gunning for Parent's job as president since new selections for board positions will be made in a month and a half.