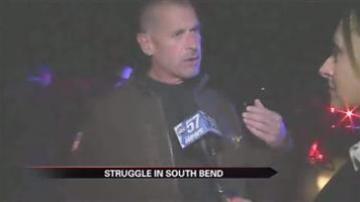 ST. JOSEPH COUNTY, Ind. -- Police say a large fight near campus that ended in a hit and run occurred at halftime during the Notre Dame game Saturday evening. Dispatchers started getting calls from witnesses around 9pm that a large fight was in progress near the intersection of Willis Avenue and Bulla just east of the Notre Dame.

27-year-old Bradley Cass was arrested and taken to the St. Joseph County Jail. He is charged with causing serious bodily injury while operating a motor vehicle while intoxicated, a class D felony in connection with this incident.

The Saint Joseph County Sheriff was on the scene and told ABC 57 that conflicting reports from two groups involved, alcohol consumption and lies complicated the investigation.

Three victims were rushed from the scene to the hospital for treatment. ABC 57 has learned a 49-year-old Mishawaka man name Al, suffered the most severe injuries. He was found in the middle of Willis Avenue with major facial injuries and chest wounds.

The three others that were with Al Saturday night invited our ABC 57 crew inside Al's home where he was taken today after being released from the hospital.