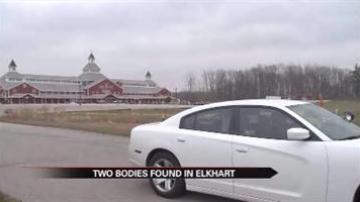 ELKHART, Ind. -- Two people were found dead in Elkhart on opposite sides of town.  Police say the incidents may be connected.

Police received a call around 10:50 a.m., someone found a woman lying dead  outside of the Farmer's Market in Elkhart.  Not long after that, another call came in - a body was found outside of a lounge across town.

The victims have been identified as Debbie McDowell and Ervin Howard.

Police said McDowell's body was lying there for less than twenty-four hours before it was found.

The cause of death is still unknown. Lt. Traivs Adamson with the Elkhart County Sheriff's Department said, "It's being ruled as a homicide at this point."

An autopsy is scheduled for the Monday or Tuesday of next week.

Around the same time, Howard's body was found in the Poor Tony's parking lot.

Elkhart City Police are handling that case.  Adamson said they are working to determine if the deaths are connected.

"We are working with Elkhart City Police to see if there's any collaboration or cooperation of information so we can decide if the two are associated."

Police ask anyone who knows anything about the two incidents to contact them immediately.