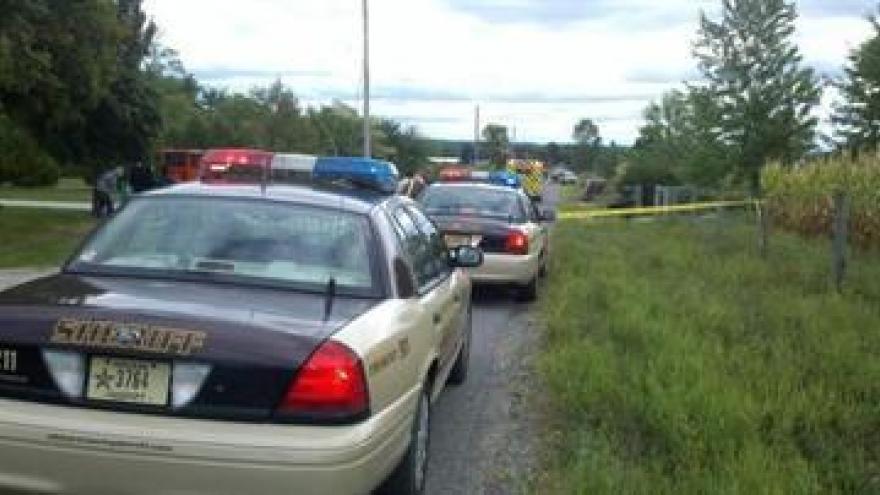 MIDDLEBURY, Ind. – An SUV slammed into one of two pony-carts carrying six children on County Road 24 just east of the intersection with County Road 43 around 10 in the morning on Monday.

"From our understanding the buggy pulled into the path of an eastbound vehicle," explained Captain Michael Culp of the Elkhart County Sheriff’s Department.

Out of the six children, aged four to ten, all but one suffered head injuries and were cared for at first by neighbors and then emergency crews.  Two children, ten-year-old Jenna Miller and 7-year-old Jolisa Miller, died from their injuries. Jeneva Miller, also ten-years-old, was driving the first cart and was airlifted to Parkview Hospital in Fort Wayne along with nine-year-old Joyce Miller.  Jared Miller, four-years-old, was airlifted to Bronson Methodist Hospital in Kalamazoo.  Justin Miller, five-years-old, complained of shoulder pain but declined medical treatment.  The accident forced emergency responders to call in multiple medical helicopters.

“There were three separate helicopters that came in,” Captain Culp explained.  “Medflight, Western Michigan and then Samaritan.”

As the helicopters left the sound of whirling blades was replaced by the sounds of sobs from family members, the accident happened just at the end of the driveway of the children’s home.  More and more members of the community arrived.

"There's nine neighbors here in this neighborhood and it's really tough when you lose one person, we're all very tight-knitted," explained Kenny Stutzman, who lives nearby.

The driver of the vehicle remained on scene and was obviously shaken.  Members of the children’s family came over to comfort her as did chaplains from the sheriff’s department.  The consoling and grieving grew as more Middlebury citizens arrived; news of the accident had spread quickly.

"There's lots of prayers going out right now,” explained Kenny Stutzman.  “I was in Shipshewana when this happened and it's already been reported, called over there and told us about it and said to come back home and see how things are going."

Stutzman explained how the Mennonite community responds to accidents like this one.

"Everybody packs together, gets the homes ready,” he described.  “Nobody expects something like this, it really brings neighbors together."

Though the family and the community are mainly focused on grieving, there were some concerned about why the accident had happened.

The Elkhart County Crash Investigation Team was on scene investigating the accident and has yet to determine a cause, the driver was not cited.  Accidents involving horse drawn carts have happened in Elkhart County before.

“Typically, we have several a year but I wouldn’t say it would be a typical thing that would happen,” explained Captain Culp.

Though they don’t know the cause, police say this accident should be a reminder to drivers that horse-carts and buggies are another hazard on the road.

“It never hurts for anybody just to pay a little extra attention when they’re on the road,” Captain Culp explained.

According to Kenny Stutzman, a viewing and funeral services for Jenna Miller may begin as soon as tomorrow.