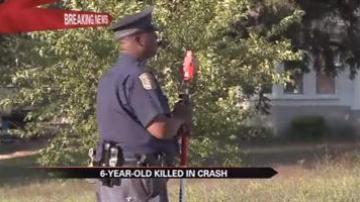 Sophia True, 6, and Juliana Brown, 9, died from their injuries sustained during the accident.

Police say Sarah Michael, 19 who picked up the girls from school Tuesday, is in serious condition at the hospital.

Neighbors said they could tell by the look of the cars the injuries were severe.

“It would be a miracle that anyone could survive that,” said Jean Wenger.

Wenger said when she returned home and saw the car and truck that had wrecked into one another she knew the injuries were serious.

Police said the man driving the truck, Robert Camfield, 60 was going eastbound on the M-60 when Michael who drove southbound on Leet Road blew through a stop sign and was t-boned by the truck.

They say Camfield had the right of way.

But Wenger said she understands how the woman missed the stop sign.

“This is a well-traveled intersection, but as you can tell on this bright sunny day, it is blinding coming from the north or the south,” said Wenger.

Wenger said she herself has trouble seeing it.

“I travel this road everyday and there are times I have almost missed it, because it is just a bad intersection," said Wenger.

Police tell us Michael was a family friend who was picking the kids up from school.

Camfield was treated and released at the scene.