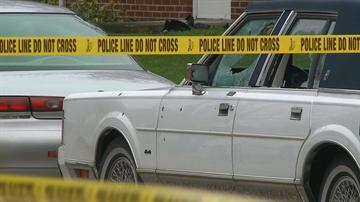 ELKHART, Ind. -- Two people were shot at the corner of Waurika & Pennsylvania at 3:26 p.m. on Wednesday.  According to the Elkhart Police Department two groups of people got into an argument at the Burger King on S. Nappannee Street.  Police believe the argument stemmed from a long-standing disagreement.  The two groups met again at Waurika and Pennsylvania and started arguing once more.  Eventually shots were fired and two people were hit.  One witness said he heard the shots and then saw two men hiding behind a car as they were being shot at.

People in the neighborhood said the shooting was a bizarre scene they weren't expecting.

"Kinda scary, it's a pretty quiet neighborhood and usually this just doesn't happen around here," explained Cliff Thompson, whose family lives on the street.

John Taylor IV, 19, was arrested for criminal recklessness causing serious bodily injury with a deadly weapon. The two victims were taken to Elkhart General Hospital.  There is no word yet on their condition.