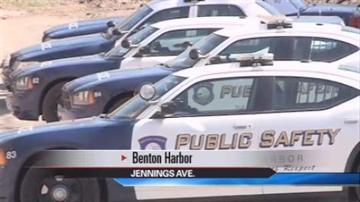 BENTON HARBOR, Mich. -- The fire fighters union says that there is only one way to describe the public safety model used in Benton Harbor. "It's a failure. It’s a failure to the residents of benton harbor, its obviously a failure to our members as well." Declared Monty Nye, chair of Michigan Professional Fire Fighters Public Safety Committee.

The Benton Harbor fire department went from having four fire fighters on duty every shift, to just one.   And the union says that cross training police officers to act as fire fighters puts everyone in danger.

On the night that the house on Jennings Avenue went up in flames, Lt. Doug Bell was the only fully trained fire fighter on duty, he tried to save the home but got trapped inside.

Fireman Rob Kokko talked about his experience working for a public safety department.  He said that like Bell, he got trapped in a burning house, and lost even his partner while trying to fight a fire without the appropriate help.

Union President Mark Docherty says this model is not saving the city money and it’s certainly not saving lives.

The union representatives say they are hoping to see Benton Harbor revert back to a fully staffed fire department before it is too late.