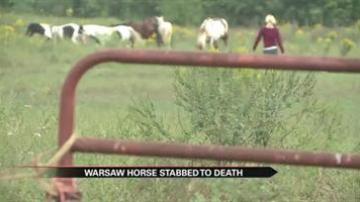 WARSAW, Ind.-- The Kosciusko County Sheriff's Department has concluded its investigation into the death of a horse and concluded the horse was not attacked or stabbed.

Deputies were called to 3591 E CR 450 South in Warsaw on September 6th after 9 p.m. for reports of a deceased horse.

The owner, Christina Meade, told deputies she left for two hours and when she returned, she found her 27-year-old horse dead in a stall in the barn.

She said the horse, Sassy, had blood underneath its jaw/chin area and the barn doors were closed.
Detectives and animal control returned to the scene Monday to further investigate.

Detectives concluded the horse was not attacked or stabbed, but sustained accidental self-inflicted injuries that caused its death.

The evidence suggests the halter got caught on an unknown object and caused Sassy's wounds.
Meade believes someone let the horse out of the barn while she was gone and would like that person to contact her.

Meade rescues horses that are abandoned or abused and provides them a home at her farm.

Meade said, “Last year there was a hay shortage and a lot of horses were starving. And all the rescues were full. There’s not enough people that do this.”

Meade said Sassy was the "alpha" of the horses she rescued.

Since Sassy's death she said the horses haven't been acting normal.

Sassy was buried on their farm and they are planning on growing carrots in the grass near her grave.