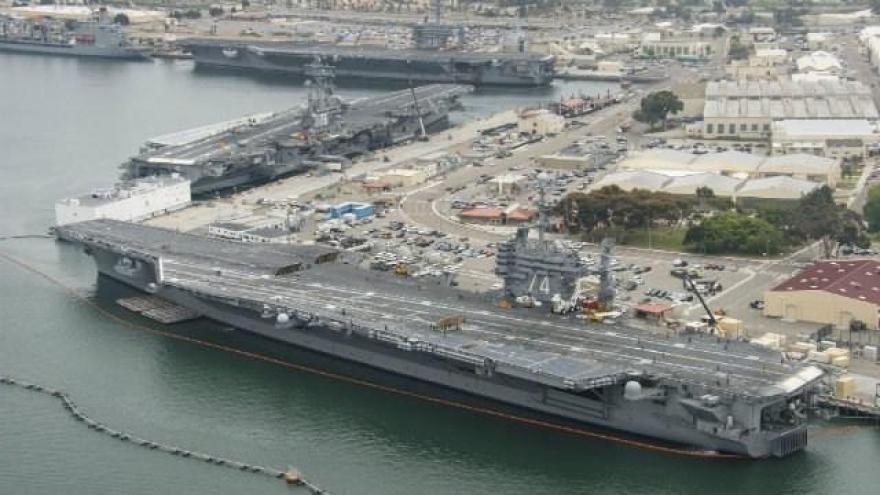 (CNN) -- The United States deployed the aircraft carrier USS Carl Vinson to the disputed waters of the South China Sea on Saturday as part of maritime "routine operations."

Sailing with the 97,000-ton Vinson is the guided-missile destroyer USS Wayne E. Meyer, the Navy said in a statement. The Vinson carries a flight group of more than 60 aircraft, including F/A-18 jet fighters.

The operation comes amid growing tensions between the United States and China over territory and trade, and as the Trump administration looks set to take a more confrontational stance toward China than its predecessor.

During his confirmation hearing, new Secretary of State Rex Tillerson said China should be blocked from accessing the artificial islands it's built, setting the stage for a potential showdown.

In a news conference Wednesday, China's Foreign Ministry said it heard about the planned deployment of the Vinson days before it happened, and warned Washington against challenging its sovereignty.

The contested waters are a crucial shipping route at the heart of a territorial dispute that pits multiple countries against one another.

China has a long history of maritime disputes with its South China Sea neighbors.

China claims almost all of the South China Sea, including islands more than 800 miles from the Chinese mainland, despite objections from neighbors such as the Philippines, Malaysia, Brunei and Vietnam.

Beijing has also created artificial islands in the area, outfitting some of them with military features. According to the US, China has reclaimed more than 3,000 acres in the Spratly Islands since 2014.

Though the US takes no position on the territorial dispute in the South China Sea, its warships have conducted routine "freedom of navigation" operations near the reclaimed islands, eliciting warnings from Beijing.

The most recent of those was in October by the guided-missile destroyer USS Decatur.

China at the time called it a serious breach of law and an intentional provocation.

There is no word whether the Vinson or the Meyer would be getting near the Chinese-claimed islands.

But Chinese media reacted quickly to the Vinson's cruise.

An opinion article in China's state-sanctioned Global Times declared that the deployment of the Vinson showed that the US wants to "create provocations and drive a wedge" between China and other countries party to the South China Sea.

"This may trigger frictions or even military clashes between China and the US," wrote Li Jie, a Beijing-based naval expert.

A separate Global Times article decried Trump's policy in the South China Sea as "unclear" and said that it may escalate tensions.

Compared to Barack Obama, Trump poses more of a risk to the area and China should "prepare diplomatically and militarily," Li is quoted as saying.

The cruise of the Vinson in the South China Sea is the second of a high-profile US Navy vessel this month.

Last week, the littoral combat ship USS Coronado, which is temporarily based in Singapore, was conducting training operations in the South China Sea, according to a Navy statement.

"While underway, we are conducting training across multiple mission areas including weapons training, manned and unmanned flight operations, ship handling, and damage control drills," said Cmdr. Scott Larson, the Coronado's commanding officer. "Training at sea in these warfare areas maintains crew proficiency and ensures we are ready to operate successfully in a variety of missions."

"The training completed over the past few weeks has really brought the team together and improved our effectiveness and readiness as a strike group," Kilby said in a statement. "We are looking forward to demonstrating those capabilities while building upon existing strong relationships with our allies, partners and friends in the Indo-Asia-Pacific region."

Among those friends has been the Philippines, which last week was hosting the crew of the attack submarine USS Louisville in Subic Bay. The Navy did not give details of the mission of the 6,000-ton sub, saying only its presence at the Philippine port "demonstrates the U.S. Navy's commitment to regional stability and maritime security in the U.S. 7th Fleet area of operations," which includes the South China Sea.