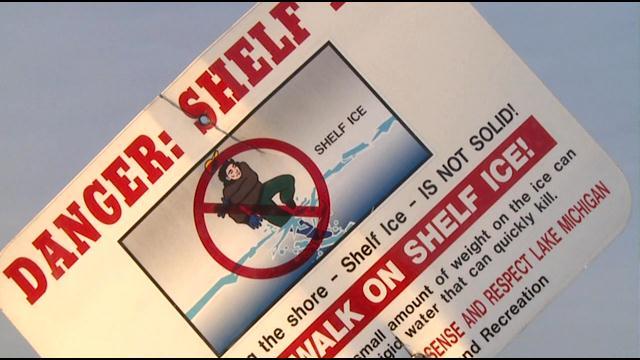 The DNR is warning people that the ice along Lake Michigan isn't safe to walk on in Michigan City. There are concerns about people falling through the ice shelf at Washington Park.

"We highly recommend that you do not go out on the ice," said Vinny DeLuca with U.S. Coast Guard. "With the way our Winter has been going with some of the warmer temperatures, people tend to think that since it's warmer, they can go out and get some pictures on the ice. They tend to wander farther than they should, not realizing that the warmer temperatures will greatly affect the thickness of the ice and therefore, they could fall through or slip."

Gary Brown, who often takes photos at Washington Park, said he did walk on the ice shelf.

"I get pictures of it every season. It's a place to go to be quiet where no one will bug you. It's just like rock climbing, that's all it was, just walking over rocks and everything. Where I was at it's pretty thick. You can see where multiple people have been walking out there."

"There are signs on the beach that say stay off of the ice shelf because it's unpredictable and just plain dangerous,” said DeLuca. “If you want to take pictures of the lake, stay on the beach, on the sidewalks and do it from afar. It'll greatly reduce the risk of falling in or wandering off."
Share this article: