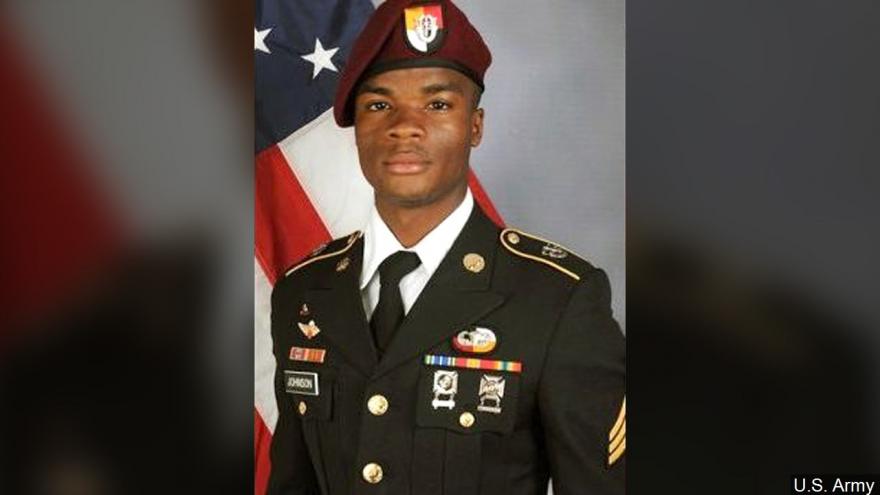 (CNN) -- US officials are investigating local eyewitness reports that one of the US soldiers killed in an ISIS-linked ambush in Niger last month, Sgt. La David Johnson, was found with his hands tied, a defense official tells CNN, though the US military has not confirmed those accounts.

A joint US Africa Command and Niger military investigation team returned to Tongo Tongo, the village near where the attack took place, on Sunday. According to US Africa Command, investigators interviewed local villagers, physically examined multiple areas of interest, and retraced actions before, during and after the ambush.

This is just one part of the Africa Command investigation, which encompasses three continents and multiple agencies.

What happened to Johnson and how he became separated from the rest of the Green Beret-led team after it was attacked is one of the key mysteries surrounding the incident.

Johnson was found nearly a mile away from the central scene of the ambush in Niger that killed him and three other US soldiers.

CBS News and The Washington Post have reported eyewitnesses of the aftermath disclosing his hands were tied.

The Post quoted a local farmer and trader saying some children tending cattle found Johnson's remains with his hands tied behind his back and talked to a village chief confirming it.

Authorities, according to the official, are also investigating whether local villagers may have taken his body at some point before it was turned over to Nigerien forces.

Johnson's body was recovered in a remote area of the northwestern African country by Nigerien troops nearly 48 hours after he was discovered to be missing in the wake of the attack, according to US officials.

Col. Mark Cheadle, a spokesman for Africa Command, declined to comment on the reports until the investigation is complete, out of respect for the families of the fallen soldiers.

Several US military official caution the local reports are not yet verified.

Meanwhile, military investigators looking at the mission are aiming to determine whether the team had proper authorization and the most current intelligence about ISIS in the area before they went to a deserted camp to look for evidence of extremist activity, two US officials told CNN.

As CNN has previously reported, the day before the team was ambushed, they were ordered to go to a deserted ISIS camp to gather intelligence on ISIS operatives who the US believed had recently crossed over the border into Mali.

But the critical question is whether the mission to go to the camp was approved at the appropriate senior level, or if approvals were bypassed in order to get intelligence from the camp site quickly and get the team back to the relative safety of its own base.

Special operations missions in Niger are subject to the approval of more senior commanders who may be located in another area of Niger, in neighboring Chad, or even in Europe -- complicating the mission approval process and intelligence distribution.

Investigators believe that answering these questions will help explain how the team became vulnerable to attack and establish if they had appropriate orders and approvals or decided to take on the reconnaissance task without all the required approvals.

The conclusions reached could lead to changes in the way missions are authorized and the way intelligence is quickly assessed and distributed to forces in the field.

Investigators are also examining if the team had the most up to date intelligence on ISIS before going to the camp. Both officials emphasized that recent intelligence about the growth of ISIS in the Niger-Mali border region had provoked discussions inside the military about whether the troops should have been in the area and so lightly armed.

It's also believed the US soldiers may have died in the first hours of the firefight. Investigators are looking into reports the US troops tried unsuccessfully to send the Nigerien forces they were accompanying around in a flanking maneuver to counterattack from the side and rear. Four US troops -- all believed to be those killed -- may have gotten out of their trucks and separated from the other personnel to attempt an attack on another front. But officials stress until the investigation is completed they cannot be certain how the firefight precisely unfolded.

The US military investigators from US Africa Command headquartered in Stuttgart, Germany, are now conducting interviews that will eventually range across Africa, the US and France, which provided military aircraft overhead during the ambush, before the tentative deadline to complete their report in January.

The chairman of the Joint Chiefs of Staff, Gen. Joseph Dunford, has indicated the question of the troops' preparation for the mission is being examined, saying in an October 23 press conference, "The questions include, did the mission of US forces change during the operation? Did our forces have adequate intelligence, equipment and training? Was there a pre-mission assessment of the threat in the area accurate?"