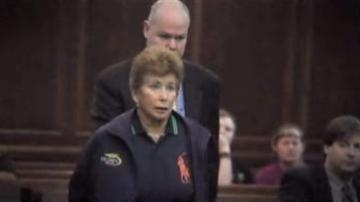 Louis Ann Goodman, 70, is a well-known tennis umpire but on Wednesday, she is a suspect in the murder of her husband.

She called police to her Los Angeles home where they found her 82-year-old husband dead.

Goodman claimed her husband fell down the stairs.

But investigators think she may have beat and stabbed him with a coffee mug.

"The victim sustained multiple blunt force trauma and also multiple sharp force injuries to the head," Det. Dave Peteque of the LAPD said. "We located the coffee bug in several pieces at the scene of the crime."

Goodman was arrested in New York where she was set to work the U.S. Open.