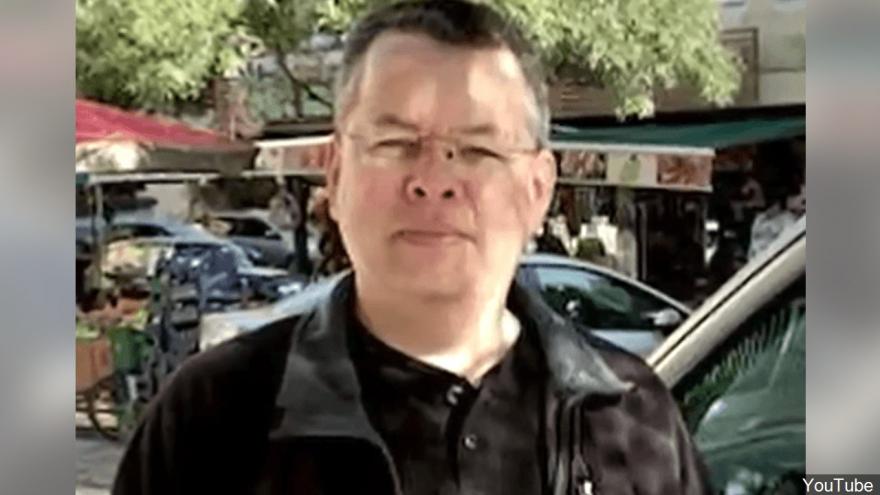 (CNN) -- A Turkish court has freed US pastor Andrew Brunson two years after he was detained, charged with helping to plot a coup against President Recep Tayyip Erdogan.

The case had soured relations between Turkey and the United States, heightened by President Donald Trump's defense of Brunson as his administration elevated religious freedom as a cause.

The court on Friday sentenced Brunson to three years and one month in prison, but chose to release him based on his time already served, as well as his manner during the proceedings, his lawyer said. Prosecutors were seeking a 10-year jail term.

The court's decision comes a day after a source told CNN that US officials believed they were on the verge of securing Brunson's release.

Trump tweeted after the verdict: "My thoughts and prayers are with Pastor Brunson, and we hope to have him safely back home soon!"

Before the verdict, Brunson was able to meet his wife in the courthouse, where they held hands and talked about the possible outcome.

"I am an innocent man. I love Jesus. I love Turkey," said Brunson, wearing a dark suit and red tie.

Brunson was moved to his home in July this year, placed under house arrest and given a travel ban, in a move seen as a potential step toward his release.

Brunson's lawyer Ismail Cem Halavurt told CNN that Brunson's electronic tag would later be removed and that his client was now a "free man."

A source, who confirmed Brunson's travel ban and house arrest had been lifted, told CNN that the next step was to guard his safety and get him out of the country.

A senior White House official cautioned that an intricate "choreography" needed to unfold before Brunson could return to the United States.

He is expected to first fly to Germany for a full medical evaluation at the US' Ramstein Air Force Base, the official said.

Turkey detained Brunson in October 2016 in the aftermath of a failed military coup.

Brunson, a native of North Carolina, worked as an evangelical Presbyterian pastor at the Izmir Resurrection Church.

He has lived in Turkey for more than 23 years with his wife and three children, according to the American Center for Law and Justice, which had advocated for his release.

The Brunson decision comes at a time of intense global attention on Turkey, which has locked horns with Saudi Arabia over the disappearance of a Saudi journalist in Istanbul.

Turkish authorities claim to have audio and visual evidence that shows Jamal Khashoggi, a Washington Post columnist, was killed inside the Saudi consulate, a source familiar with the ongoing investigation told CNN.

Saudi Arabia firmly denies any involvement in his disappearance.

Brunson's release is also a step forward in Turkish-US relations, which have shown signs of warming in recent months. Trump and Erdogan met briefly on the sidelines of the UN General Assembly in September for the first time since relations soured. Shortly afterward, Erdogan said the two countries would likely weather the storm.

Turkey has good financial and strategic reasons to release Brunson, several analysts have said, including the threat of further US sanctions if Brunson was not released.

In August, Trump told reporters that Turkey had "not acted as a friend" and that the charges against Brunson were "phony."