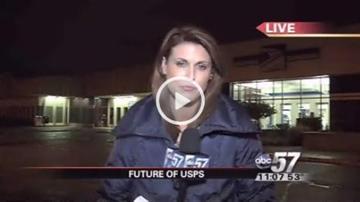 SOUTH BEND, Ind. -- All across the country U.S. Postal Service employees rallied to save their jobs as the uncertain future of the USPS threatens to close down thousands of post offices nationwide and layoff hundreds more.

Back in March, the U.S. Postal Service announced it would be closing over 2,000 post offices nationwide, eliminating thousands of jobs. The news came after it reported an $8.5 billion loss in the 2010 fiscal year.

Around the nation, USPS employees rallied together to save "America's Postal Service".  Right here in Michiana, hundreds of employees joined the fight by gathering in front of the South Bend's main mail processing plant off of Michigan Street in downtown South Bend.

Employees say the postal service is not outdated and has evolved with technology, which is why they have a plan to stop the layoffs.

Tony Flora has been a letter carrier for 30 years now, delivering mail to people living on the East side of South Bend. He was one of the many people leading today's rally despite all the rain.
"Weather is never a deterrent for city letter carriers, for any carrier. You know us postal people, we go through anything," says Flora.
Against the odds, dozens of people came out today to fight to save their jobs and their futures. It was a demonstration seen around the country to send one clear message.
"The post office is a cornerstone of the nation and to tell everybody how bad we are and how ineffective we are is ludicrous," says long-time employee Eric Anderson. "This is really to get the word out to America that the post office is not broke, their post office is not broke."
However, that is not what the U.S. Postal Service says. It says it's losing money because it's not moving as much mail anymore. That is why it plans to stop Saturday mail delivery and consolidate mail processing centers, like moving the South Bend to Fort Wayne, all in an effort to help cut costs.
"It would be a giant empty whole in downtown South Bend and people would see their mail service deteriorate," says Flora.
Employees say that's not the whole story. Since 2006, congress has required the U.S. Postal Service to pay into a fund to to cover future health care cost for employees.
"Each of those four years, the U.S. Postal Service has had to come up with $5.5 billion, and that's what's is causing the budget crunch."
Employees say there is a simple fix, House Bill 1351. Employees say, if pasted, it would eliminate the fund and stop it from eating up all of the U.S. Postal services revenue.
Congressman Joe Donnelly is a co-sponsor of the bill, which is why the march started at the post office and ended in front of his office. Employees say it will be this bill that will save the 750 jobs across the country that would be cut.
Share this article: