U.S. Senate candidate under fire for comments on rape 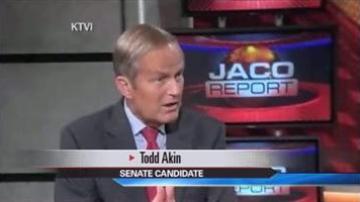 MISSOURI -- A Missouri congressman and U.S. Senate candidate is under fire for some comments made over the weekend about abortion, even in cases of rape.

Congressman Todd Akin spent Monday apologizing and trying to explain what he mean during a speech over the weekend.

"It seems to me, first of all, from what I understand from doctors, that is really rare---if it's a legitimate rape---the female body has ways to try and shut that whole thing down," Akin said.

The comment and the firestorm it sparked calls for him to drop out of the race.

Akin was seen as one of the best chances Republicans had to flip a Senate seat.

Until Sunday, his opponent, Senator Claire McCaskill was seen as one of the most vulnerable democrats up for re-election.