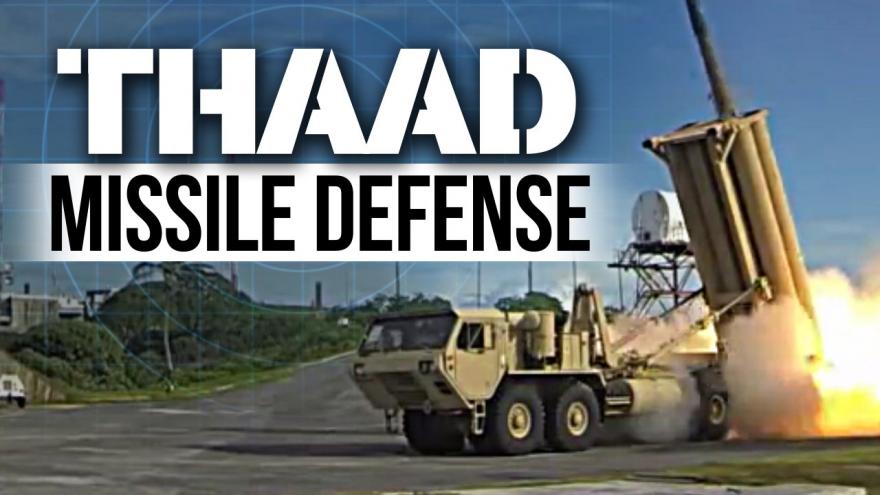 (CNN) -- The United States said it conducted a successful missile defense test in the Pacific Ocean on Sunday amid growing tensions with North Korea.

US Forces tested the Terminal High Altitude Area Defense (THAAD) system in Alaska by launching a ballistic missile over the Pacific Ocean, according to the US military.

The medium-range ballistic missile was detected, tracked and intercepted, it said.

The tests appears to be a show of force two days after North Korea conducted an intercontinental ballistic missile test.

US Missile Defense Agency director, Lt. Gen. Sam Greaves, said it's part of an effort "to stay ahead of the evolving threat," but did not provide specifics.

"In addition to successfully intercepting the target, the data collected will allow the Missile Defense Agency to enhance the THAAD weapon system," he said.

Soldiers used the same procedures they would use in an actual combat scenario, according to the US military. It said this is the 15th such test for the THAAD weapon system.

North Korea said it tested a ballistic missile that can reach all of the United States. Its test of a Hwasong-14 intercontinental ballistic missile Friday was its second of the long-range weapon in a month. The first on July 4 showed the missile had the range to reach Alaska.

Washington should regard the launch as a "grave warning," North Korea state media reported.

The Trump administration has answered Pyongyang's missile tests with displays of US military power, including missile tests of its own.

The US sent two B-1 bombers from Andersen Air Force Base in Guam on Saturday on a 10-hour round trip over the Korean Peninsula.The US Pacific Air Forces described it as a direct response to the North Korean missile test.

The B-1s teamed up with Japanese and South Korean fighter jets to test "combined capabilities" during the mission, the US military said in a statement.

"We have a responsibility to our allies and our nation to showcase our unwavering commitment while planning for the worst-case scenario. If called upon, we are ready to respond with rapid, lethal, and overwhelming force at a time and place of our choosing," said Gen. Terrence J. O'Shaughnessy, commander of the Pacific Air Forces.

While Washington continues its military pressure, it has also asked China to pressure North Korea economically to cut off its access to foreign currency.

It uses "hit-to-kill technology where kinetic energy destroys the incoming target," the US military says.

Each THAAD system is comprised of five major components: interceptors, launchers, a radar, a fire control unit and support equipment, according to Lockheed Martin, the security and aerospace company that serves as the prime contractor.