US6 detour causing headaches for nearby residents 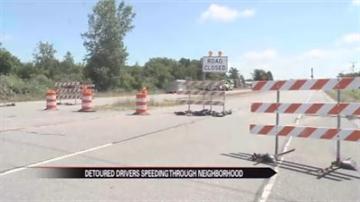 MARSHALL COUNTY, Ind. -- Since May, US6 has been closed since June and drivers have been re-routed to US31. Many drivers are taking a short cut on 1st Road and that is causing problems for residents.

"Down on LaPaz when they are coming out onto 31, it’s been really hard in the mornings for people turning south to head to Plymouth. There is really no light down there, it’s just a stop sign. They have to wait for both lanes of traffic to clear before they can pull out and it causes big backup in the mornings,” said Bremen resident Mary Schweisberger.

Instead of taking the posted detour, many drivers are creating their own alternate route – First Road.

They are speeding down the quiet residential road.

"I see people coming and going off that one pretty fast onto First and not putting on their turn signals. Things like that that could cause wrecks,” said Sande Schutz, LaPaz resident.

"Every once in awhile you get people going a lot faster than what really should be going down here,” said LaPaz resident Dean Snyder.

The road construction is also a big problem for farmers in the area. One farmer said First Road is the most direct route, but also the most dangerous.

"Traffic is nonstop down the road. And getting farm equipment down the road is almost impossible. It takes you four times the amount of time it would normally,” said Greg Haas, LaPaz resident.

Residents along First Road say all the extra traffic isn’t safe for their children.