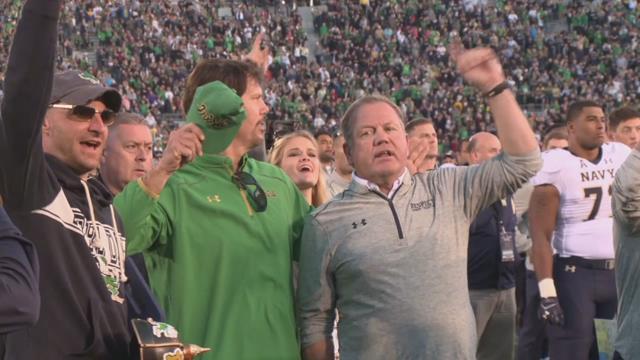 Notre Dame and USC's rivalry isn't just on the football field. The two are often battling for the same recruits.

Notre Dame Head Coach Brian Kelly says this is probably their biggest recruiting weekend in South Bend. With four and five star players and their families in town, it's a chance for Notre Dame to show off the glory of the golden dome under the lights.

At least 15 potential Irish players and their families are coming to South Bend.

"It will require some work on Friday, Saturday and Sunday from the whole staff," said Coach Kelly.

"It's laying that ground work," said Tim O'Malley at Irish Illustrated. "Having the guys that are perfect fits here fall in love with the university. When they go to make their decisions they remember the atmosphere of Notre Dame USC at night."

In addition to official visits, coaches have to accommodate more than a half dozen players and families who have already verbally committed to Notre Dame.

"We are going to have scholarship players that are up here that we can't treat as though we forgot their name," said Kelly. "It just means everyone has to be on top of it. It requires an attention to every single player."

One of the most notable players arriving this weekend is five star linebacker Daelin Hayes. He actually de-comitted from USC Sunday after the Sarkesian drama unfolded. Coaches will hope to show him the gold standard.