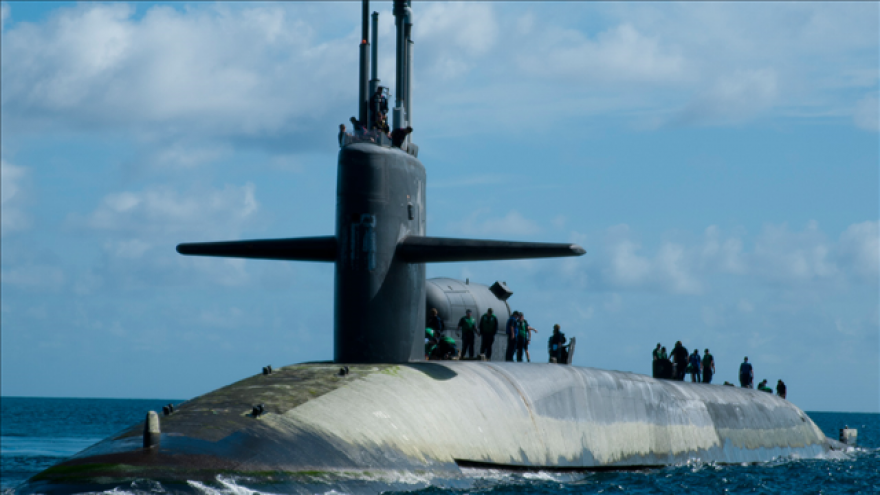 WASHINGTON (CNN) -- The USS Michigan -- an Ohio-class, nuclear-powered, guided-missile submarine -- is expected to make a visible port call in South Korea on Tuesday, according to a US defense official.

The official described the move as a show of force amid tensions between the US and North Korea.

The US Navy submarine is expected to dock in the port city of Busan, South Korea, on the same day that North Korea celebrates the 85th anniversary of the founding of the Korean People's Army.

A port call involves stopping at a foreign port for supplies, repairs or transshipment of cargo.

The Vinson will be joined by the Ashigara and Samidare destroyers in "tactical training" drills near the Philippines, the Japan Maritime Self Defense Force said.

North Korea's state-run newspaper Rodong Sinmun said in an editorial the country is ready to illustrate its "military force" by sinking a "nuclear-powered aircraft carrier with a single strike."

While the USS Michigan is not expected to take part in the joint exercises, its presence in the region is meant to send a strong message to Pyongyang ahead of the supercarrier Vinson's expected arrival near the peninsula this week.

The 560-foot Michigan is the US Navy's second Ohio-class nuclear-powered submarine.

Armed with tactical missiles and equipped with superior communications capabilities, the Michigan is a stealthy submarine used to carry out strike and special operation missions without being detected, according to the Navy.

The North Korean state newspaper claimed to have weaponry that "can reach continental US and Asia Pacific region" and the "absolute weapon," or a nuclear hydrogen bomb.

In the face of recent saber-rattling from North Korea, President Donald Trump had said the Vinson carrier group was being deployed to waters off the Korean Peninsula

The Vinson's location has dominated headlines after Trump's remark on April 12.

Trump said he was sending "an armada" to Korean waters potentially to deal with threats from North Korea. The statement came after Pyongyang said it had successfully launched a new ballistic missile.

"We are sending an armada. Very powerful," Trump told Fox Business Network's Maria Bartiromo. "We have submarines. Very powerful. Far more powerful than the aircraft carrier. That I can tell you."

But it turned out the carrier group was not actually steaming toward the peninsula at the time, but rather heading to joint exercises with the Australian navy.

The US Pacific Command said last week that training with the Australian navy had been completed, and that the Vinson strike group "is heading north to the Western Pacific as a prudent measure."

CNN's Junko Ogura and Susannah Cullinane contributed to this report.