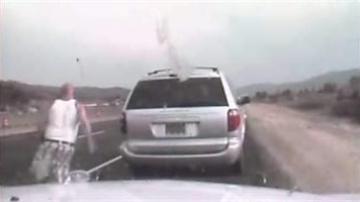 UTAH – A suspected drunk driver took the police and his kids on a wild high speed chase.

Police say Robert Hills got pulled over, but instead of speaking with police, he took off leading the highway patrol on a 115 mile-per-hour chase through Utah.

The van sped through construction areas and traffic without much hesitation. Troopers called off the chase at one point for safety reasons.

It finally ended when they spiked the van's tires. Shockingly officers say Hills' wife and four kids were along for the ride.

The Utah Highway Patrol said they had to stop Hills because they were afraid he might hurt someone.