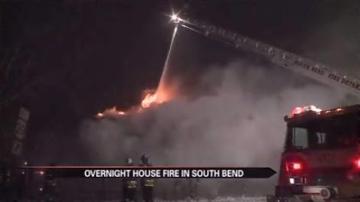 SOUTH BEND, Ind. — A fire at a vacant home on South Bend's west side closed a portion of a major road. The fire broke out just after midnight and crews were forced to close down Lincolnway near Marion.

Fire crews said the heavy snow and wind made putting the flames out difficult.

"We're not making entry because its too dangerous, the roof's already caving in," said Battalion Chief Nick Tekler. "There's holes in the floor and the stairwell is burnt out. We just have to work our way from the outside and stay safe."

It is unclear how the fire started. But fire department thinks someone may have broken in.

Both roads have since reopened.