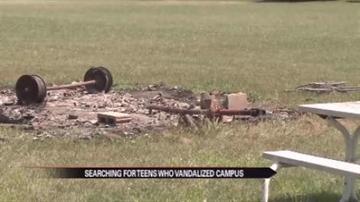 Surveillance video shows two teenage boys running across the parking lot right before the school's storage barn was broken into.

"Basically I came over around 10 o’clock in the morning and realized someone had busted into our bus barn, got our gator out and drove it around our campus and knocked down the fences. They burned down our soccer shed where we keep all the scoreboard material,” said Matt Herbst, Principal of Michigan Lutheran High School.

The Royalton Township Fire Department responded to the fire, but it was too late.

The shed and everything in it was lost.

The suspects also took the gator out for a joyride. They drove it into a fence and left it there.

"The front of it got damaged. We're going to have to get it rekeyed because they took the keys to it. We're getting the underbody checked out right now to see if there is any damage to it,” said Herbst.

Herbst says the suspects left a few things behind.

"There were beer cans over where they parked and some cigarette butts. So we know that they were drinking. It was two o'clock in the morning and nothing good usually happens at two in the morning with alcohol,” said Herbst.

The principal said the teenagers also shattered some windows and painted obscenities on the lawn. He says he hopes that they will do the right thing and turn themselves in.