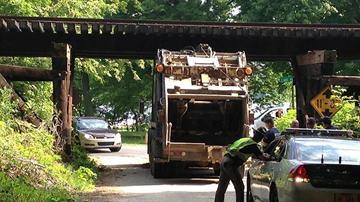 LAPORTE COUNTY, Ind. – A garbage truck that was too tall to go under the South Shore train overpass in Hudson Lake struck the overpass and became wedged underneath. The accident damaged the track and forced train service to be disrupted.

David Workman is the owner of Lakeshore Recycling and Disposal. One of his employees was driving the truck that hit the bridge overpass.

"There's no indication of a low bridge sign anywhere. And then when he did come up to the bridge, the signage for the bridge is blocked by shrubs and difficult to see. So I feel really bad for him and everybody involved,” said Workman.

The truck is just two inches too high for the overpass.

Officials say the track moved 6 feet from its original bearings on the bridge.

"A train striking that hazard at 79 miles per hour could have been a very tragic event that happened here,” said Robert Byrd, Chief of Police, Northern Indiana Commuter Transportation District.

That tragedy was too close for comfort.

The number 14 train from South Bend was just a half of a mile down the track heading for the bridge when the accident happened.

There was a six minute time frame from when this accident happened to when the train could have been here.

The driver said he heard the train horns one street over when he got out of his truck to call 9-1-1.

Fortunately, dispatch was able to stop the train.

Officials say his call was critical to preventing a much more serious incident.

Thursday was the first time the driver was driving this particular truck on this route.

Crews are expected to be on scene until dark. They have to remove the railroad beams and deconstruct the bridge to pull out the truck.