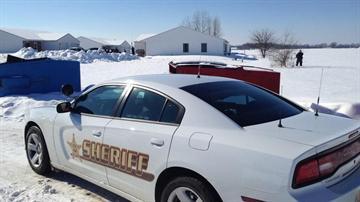 Elliot escaped from the Ionia Michigan Correctional Facility Sunday evening. He is accused of carjacking a woman and driving her 2004 Jeep Liberty to the Gallop's gas station in Middlebury.

The Jeep was found in a neighborhood behind Shipshewana's old police department.

After locating the vehicle, police went door to door searching for the suspect.

"When they got here, they were on fumes; they had no gas left," said Todd Petersen, Michigan State Police.

Police say the woman called 911 while he was getting gas, went into the gas station and locked herself in the restroom.

Elliot left the gas station with $11 in gas in the tank.

"I mean, that's not a lot of travel time - with that amount of gas," said Petersen.

While searching for Elliot, local schools were on lockdown and the LaGrange County Sheriff's Department told residents to lock up and stay inside.

Although he is considered dangerous, he didn't harm the woman he abducted.

"He didn't make any comments to our victim or anything like that - or there was some intent to getting out harming anyone else. I think he just wanted to get away from Michigan," said Petersen.

Police say the vehicle was in this neighborhood as early as 5 a.m. Monday, but they didn't find it until seven hours later.

At 4:45 p.m. the LaGrange County Sheriff sent a release that said they had searched Shipshewana thoroughly and found no sign of Elliot. They are asking residents to call in anything suspicious.

Elliot was convicted of killing four people in 1993.