There's absolutely no way we're talking snow on the last weekend in April, right? After all, we've seen some days in the 70s and everything is greening up and blooming. Well, this is the Midwest and we can sometimes get all four seasons in the matter of a few days. And unfortunately for us, the season we're set to see this weekend is winter. 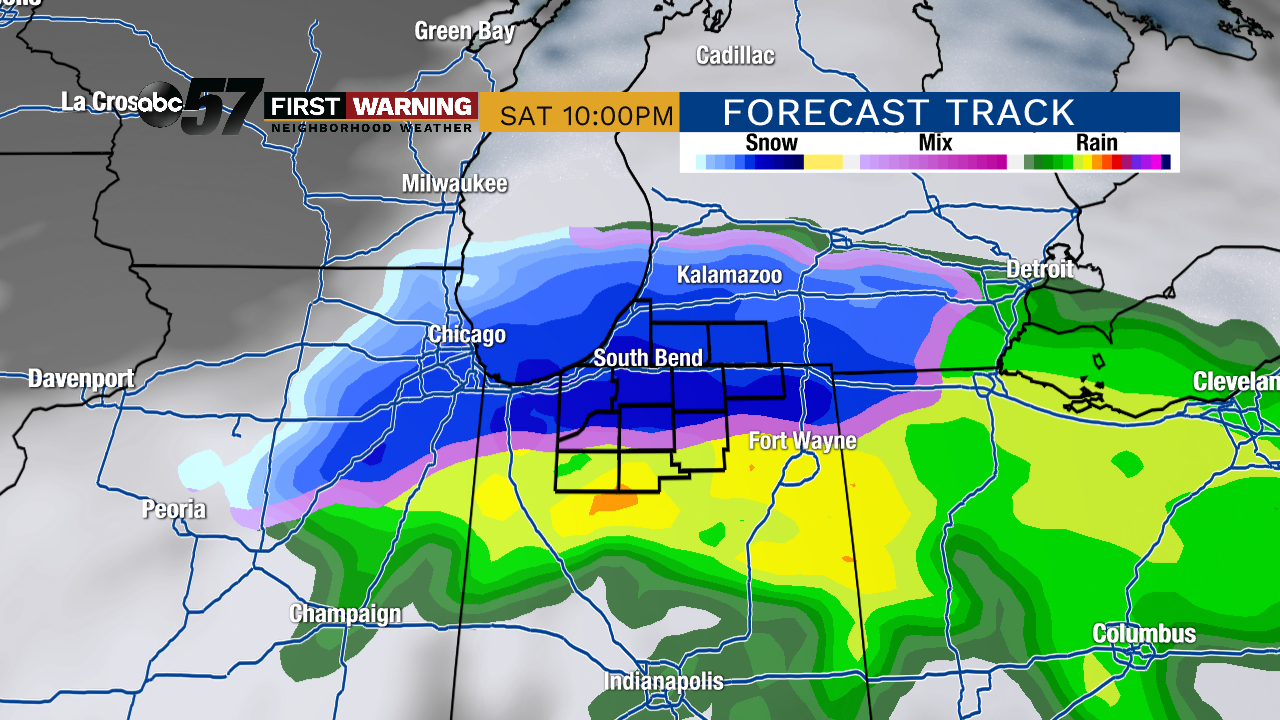 Radar at 10 p.m. Saturday.
A very rare late-season winter storm is set to impact parts of Minnesota, Iowa, Wisconsin, Illinois, Indiana, and Michigan on Saturday. Heavy, wet snow will begin out in Minnesota and Iowa Saturday morning before rapidly spreading eastward toward Northern Indiana and Southern Michigan by Saturday evening. Where it falls, it will accumulate. That is especially true for grassy and elevated surfaces. 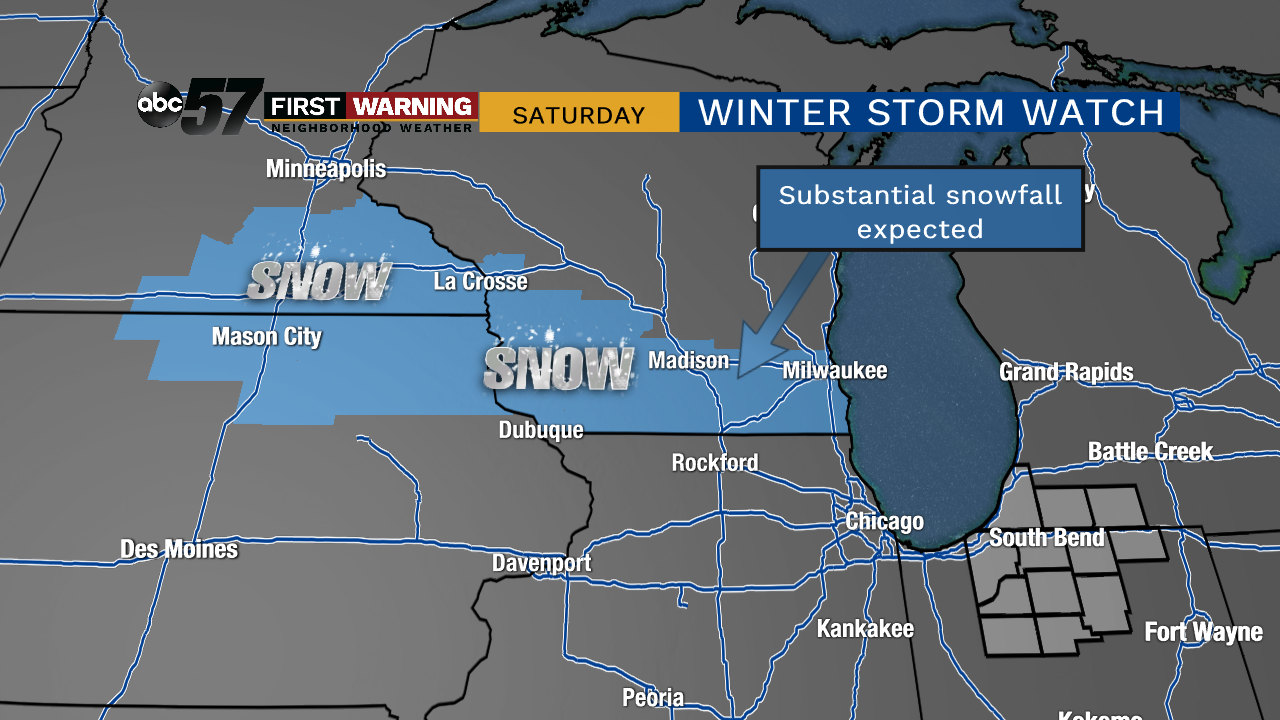 Winter weather alerts as of 12:45 p.m. on April 26th.
Where the snow falls the heaviest, there will exist the threat of snowfall rates up to 2" per hour. Whoever sees rates like that will likely see the snow quickly accumulate on roads and highways as well. As of 12 p.m. Friday, the areas with the highest probability of seeing heavy, accumulating snow include Northeast Iowa, Southeast Minnesota, Southern Wisconsin, far Northern Illinois, and Southwest Michigan. 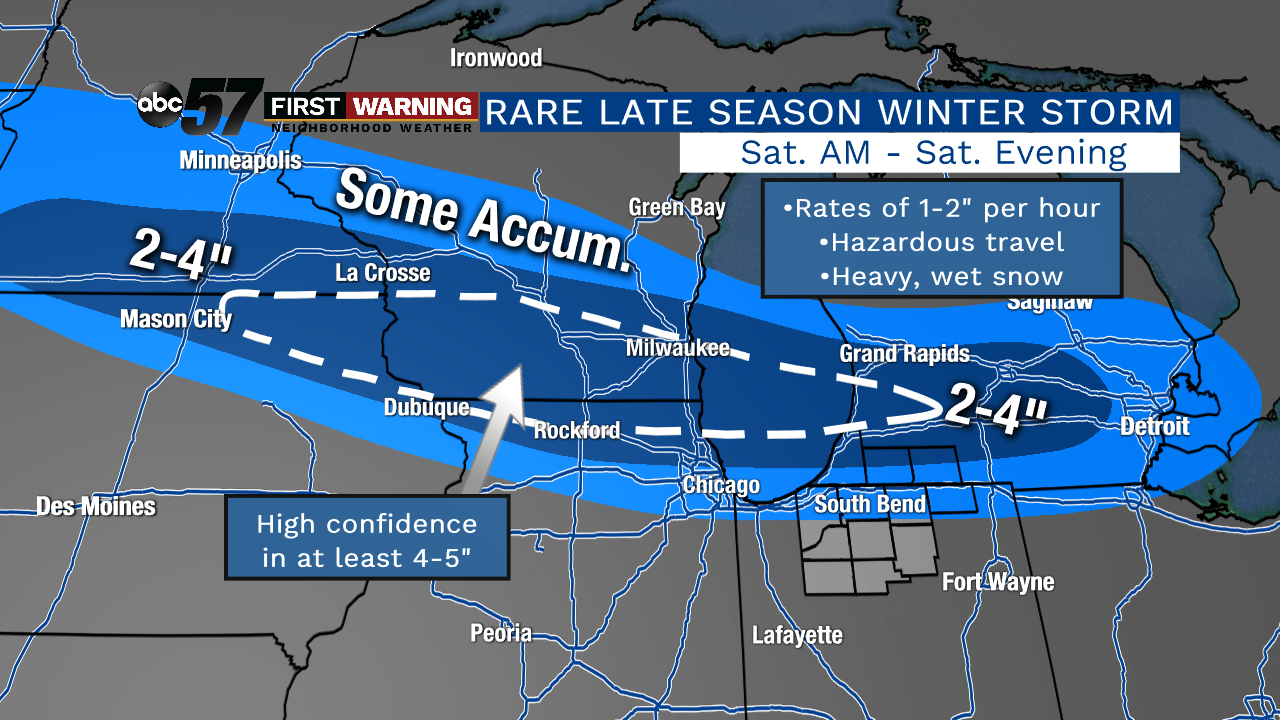 In fact, a very unusual late-April Winter Storm Watch is already in effect for parts of Minnesota, Iowa and Wisconsin. Additional areas could very well go under some sort of winter weather alert by Saturday morning as the exact track of the system is nailed down. Something important regarding the track of the system is that each time new data come in, the swath of heaviest snow seems to be sagging a hair farther south. 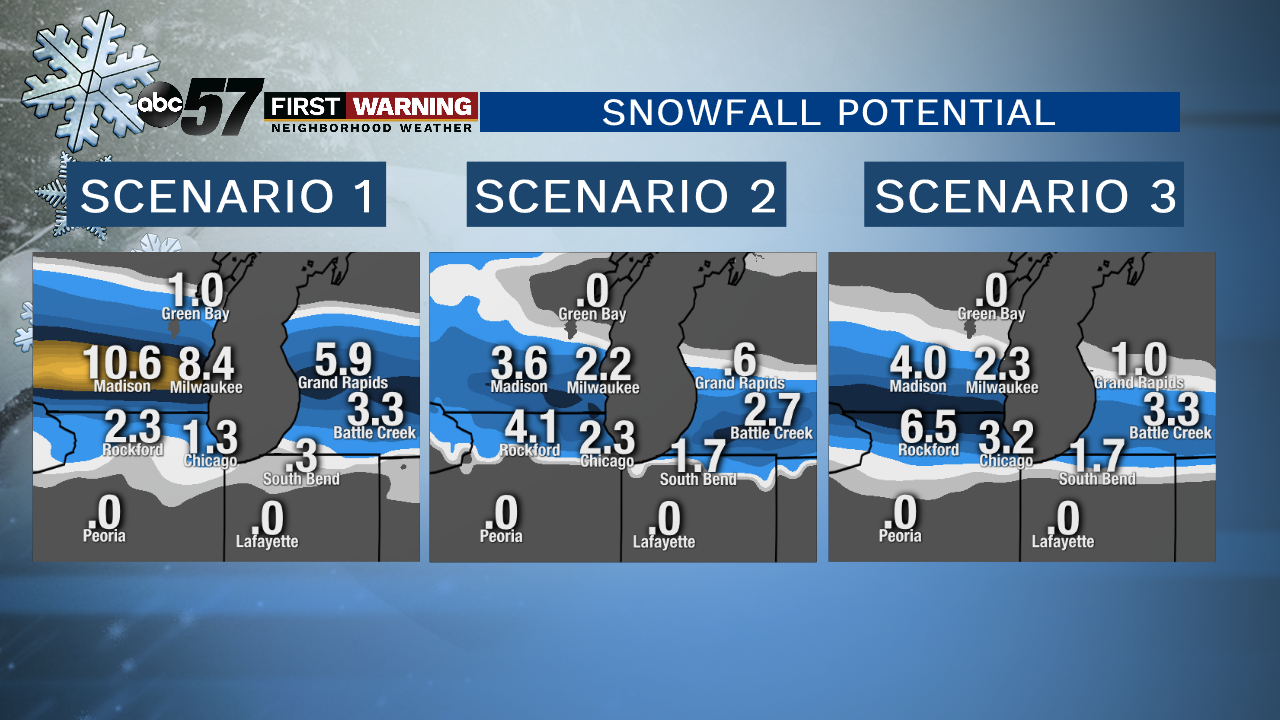 3 different forecast models and their snowfall total predictions.
Why is the slight southward trend important? The farther south the low pressure goes, the higher the chance of accumulating snow in Michiana. As of Friday afternoon, the track of the low favors the heaviest snow falling just to our north. However, nearly every single forecast model indicates a chance of at least some minor accumulation late Saturday evening into Saturday night north of U.S. 30. For Berrien and Cass Counties, a few inches of wet, slushy snow is a very realistic possibility. 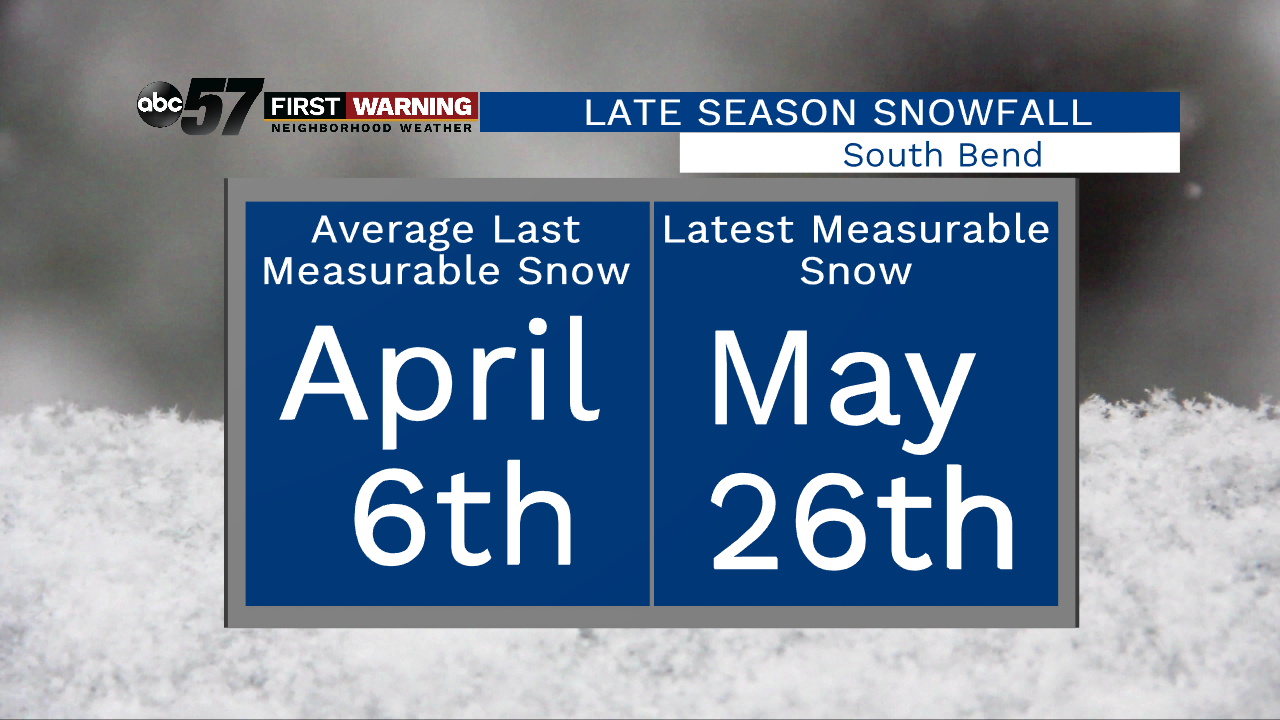 If the track winds up being just 10-20 miles farther south than currently expected, those in Michiana north of U.S. 30 could end up seeing more snow. For now, though, we will keep totals as follows:

•South of U.S. 30: no snowfall accumulation

•Between U.S. 30 and the Toll Road: upwards of 1" of wet snow on grassy and elevated surfaces

•Southwest Lower Michigan: 1-2" with higher totals possible north of I-94

If South Bend sees enough snow stick to officially record a "trace," it will be one of the latest accumulating snow events in history for the city. The average last measurable snow in South Bend typically falls on April 6th. So yes, this would be considered abnormally late for snow. 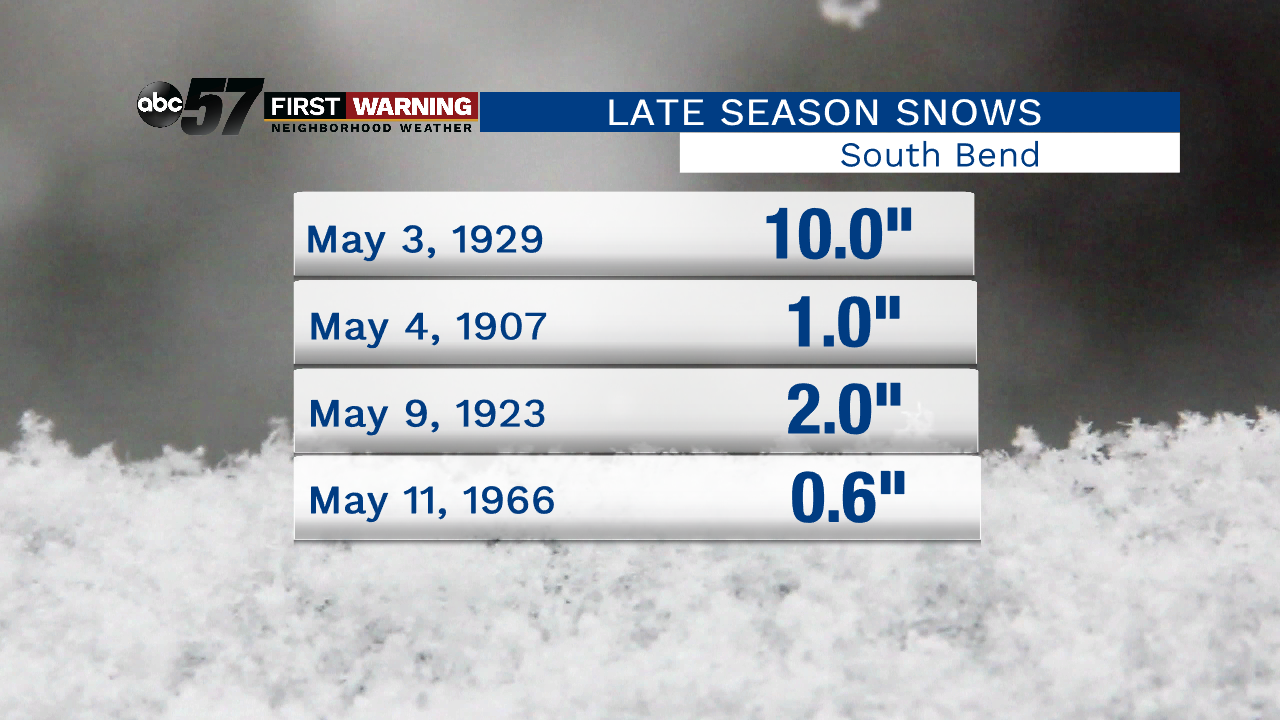 Believe it or not, South Bend saw 10" of snow back on May 3rd of 1929! There are a few other instances of "sticking" snow in May, but they are very much so few and far between. The absolute latest date for seeing at least a "trace" of snow is May 26th! Can you imagine seeing snowflakes fly just five days before June?! Let's just hope the track of this keeps the heavier snow to our north.
Share this article: