Veteran from Three Oaks shot to death in El Salvador 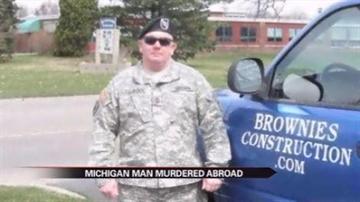 THREE OAKS, Mich. -- Residents of Three Oaks, Michigan are mourning after a local veteran was murdered overseas while visiting his estranged wife in El Salvador.

He was shot by what El Salvador’s news media is calling a group of rebels.

Michael J. Brown’s mother put an American flag up on his house to honor her 55-year-old son, who was murdered while visiting his estranged wife in El Salvador.

“He was going there to try and patch things up,” said Michael Brown’s best friend, Carey Brown.

Carey called Michael a friend to everyone in Three Oaks.

“Anybody you talk to and ask about Mike, any business you go to or any person on the street you see will say Mike Brown is a great guy, because he was a great guy."

He was also a highly decorated thirty-year veteran in the Special Forces who served in Desert Storm, Iraq and Afghanistan.

“At one time, he had his medals up and it covered the whole wall,” said Carey.

According to the police in El Salvador, Michael was driving with his ex-wife when rebels ambushed the car, shot him five times at close range and left his ex-wife unharmed.

Carey says he is not buying it.

“This was not a random act of violence. This was a calculated well put-together plan,” said Carey .

Carey says he believes the truth will come out and he hopes it will come out soon, so there will be justice for who he calls Brownie.

Currently Michael Brown’s brother is in El Salvador recovering his body.  Carey said he believes there will be a United States military investigaton.