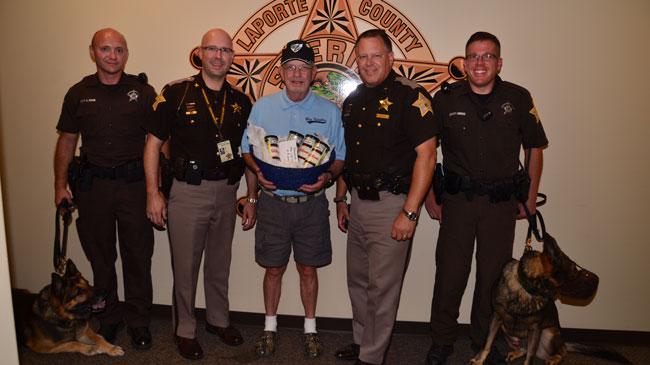 The La Porte County Sheriff’s Office received a donation to its K-9 program from a local Vietnam veteran.

On Friday, Bill Lutz and his daughter Jennifer Bye went to the sheriff’s office to present a donation to the K-9 program.

They also presented each K-9 with a canister of tennis balls, which are used as rewards for the dogs.

Lutz told the sheriff’s office he is a Vietnam veteran and served as a K-9 handler in the US Air Force in 1964.

He told them his canines were the best and most loyal partners he ever had.

He said two of his K9’s were killed in action while serving with him.

In honor of his birthday and in memory of his service dogs, Lutz made a donation to the K-9 program.

K9 handlers Andrew Morse and Andrew Hahn came on station with their partners Jager and Hokie to meet and thank Lutz and his daughter.

Representatives with the sheriff’s office said they were humbled with their kindness and thoughtfulness.