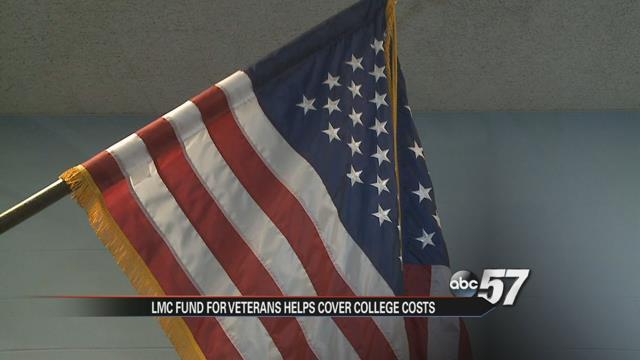 When someone makes the decision to go back to school, it can be a challenge. It can be evener tougher for veterans who are making the transition back to civilian life after their time of service.

Lake Michigan College is trying to make that transition easier for them. This year the school is recognized among Michigan's most "Veteran-Friendly Colleges" by the Michigan Veterans Affairs Agency. This is due to the help the college offers to veterans in terms of services to support educational and transitional needs.

They have a fund dedicated to helping those who have served or are currently serving in the Armed Forces or reserves. It is called the Veteran's Education Assistance Fund. The fund serves as a safety net for students who need extra financial support beyond what the G.I. Bill covers.

Students can get as much as two disbursements ranging from $50-$1,500, which can cover a range of needs.

“I was a recipient. I had a transmission problem with my car and I really needed the money. It cost me like $1,500 and it helped get my car back working,” said Navy Veteran Guy Rayon.

He said this helped him a lot in a time of need and not all colleges offer this support.

“I went to a couple other colleges and they don’t have anything like this and this college I really appreciate this college because they seem to care about us veterans,” Rayon added.

After serving in the Navy for five years back in the 70's and working several other jobs, he decided to go back to college in 2012.

“I’m majoring in Social Sciences. I want to be able to get into the area where I can help veterans at the local VA,” he said of his future social work career.

Josh Bailey is in his twenties and also a veteran who decided to go back to school. He served in the Army for a several years until 2013.

“I got out of active duty in 2013 and decided to pursue a career in nursing,” Bailey said.

He said being in the military runs in his family.

“Ever since I was a little kid, I want to serve. My family members have always served,” he added.

He chose this particular major because it is personal.

For veterans wanting to go back to school and need extra financial help, there is money still available through the college veteran fund.