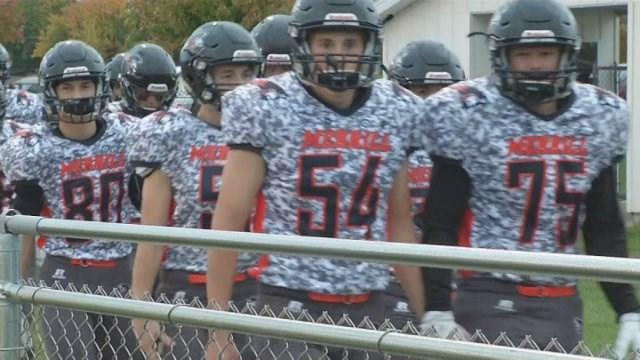 Merrill, MI -- Decked out in camouflage jerseys two opponents took the field on Friday with a common goal - showing their appreciation to the men and women who serve their country.

The competition on the field took a backseat to paying respect to those who risk their lives defending freedom.

"I think the veterans deserve anything we can do to honor the people that have served our country. Obviously, events like this would not happen if it wasn't for the support of the veterans from the wars they fought and the freedoms they protect. We wouldn't get to do stuff like this," Merrill High School's head football coach Christian Wiley said.

Men and women representing each branch of the armed services were brought to the center of the field and recognized for their service.

For Staff Sgt. Ryan Dykhouse the game felt like a homecoming.

"Defending this country no matter what branch it is, is really just a great honor and then to be around other veterans that you know served five or 10 years ago, others 20. It's often to hear stories and hear how as much as things have changed they are very much the same," Dykhouse said.

Beth Wallace, former Army officer, is from Michigan but now lives in Texas. She said the game meant something extra because it's not a typical way to be recognized.

"Where I live in Fort Hood everything revolves around the military and here they are kind of away from that so it's nice to recognize and appreciate our veterans," she said.