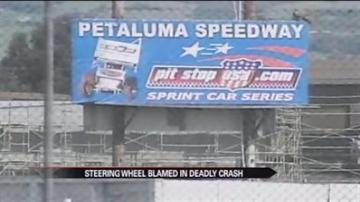 YUBA COUNTY, Calif. — A steering wheel is to blame for a crash in California this weekend.

Two people died after 17-year-old driver Chase Johnson crashed into a race-wall at about 90 miles per hour.

One of the victims in the crash was the driver's cousin.

The victim's father says he saw the steering wheel come off the car moments before impact.

Chase was hoping to one day race professionally.

After the crash that killed his cousin, he is not sure he will ever race again.