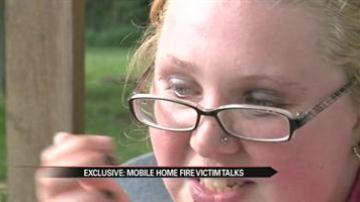 SOUTH BEND, Ind. -- A domestic dispute ended with bullets in a microwave and a mobile home on fire Wednesday night.

Jessica O’Banion has advice for anyone in an abusive relationship.

“Get out. Get out as soon as you can," said Jessica.

Wednesday night police were called out to a domestic dispute at a mobile home and moments after getting on scene, police said 24-year-old Mark O’Banion set fire to the trailer and put three bullets into the microwave.

It was a situation so dangerous police on scene called for backup.

“That could have been very dangerous, that’s why the officer would not make entry until he got back up. Because you’ve got bullets exploding you don’t know what he used to start the fire,” said South Bend Police Sergeant Stokes.

While her belongings may be destroyed, Jessica  is safe and unharmed.

Her husband Mark is still in jail.

Jessica said she feels a little safer with her dog by her side, but is worried for those in her neighborhood.

“I feel so nervous for my neighbors,” she explained.