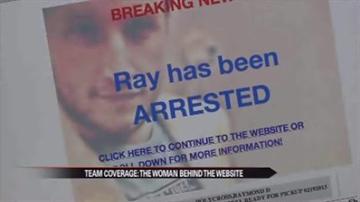 SAINT JOSEPH, MICHIGAN --  Corrine Garrison says she could not have been happier when first started dating Ray Holycross, who she met on an online dating site.

"We met and we clicked and it seemed like it would be okay,” said Garrison.

They dated off and on for two years and eventually Holycross moved in and lived with Garrison and her family.  But soon, Garrison noticed something was off with Holycross.

"He would disappear and say he had big business to do,” said Garrison.

"He said his dad was in the C.I.A. and he was killed by this people from Guatemala who shot him in the head and raped his mother,” said Garrison.

Garrison says that was not the worst of it.

"He lived here at the house..he lived off of us so he ate our food, used our transportation and then he stole $4,000 from us, said Garrison.

Finally Garrison got the nerve to kick Holycross to the curb.

"I remember dropping him off at a train for work and being like okay you are never coming back here. I never want to see you,” said Garrison.

She vented about her awful experience on a blog post--soon a lawyer from Chicago who had also been duped by Holycross contacted her.  Garrison’s brother decided to create a website called Ray Holycross.com.

"It is to warn women he is out there and he isn't playing with a full deck obviously. He has a loaded gun,” said Garrison.

In the two years the website has been up, women told horror stories of Holycross, until he was caught in Mishawaka yesterday.

"I am so happy. We have been waiting for years,” said Garrison.