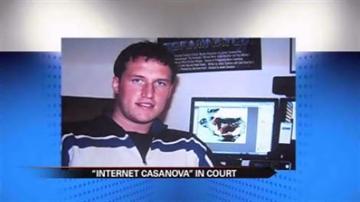 ST. JOSEPH COUNTY, Ind. -- The man known as the "Internet Casanova" was in court Tuesday for a hearing in his case. Two women in the courtroom say Ray Holycross lied to them and stole their belongings.

Dozens of women across the country claim they met 29-year-old Holycross of Plymouth on internet dating sites. They say he lied to gain their trust and then robbed them.

The prosecutor’s office believes he stole Theresa Bridegroom’s $700 camera and pawned it.

Bridegroom wasn’t the only victim in court.

"He has no remorse or feelings so I doubt that we'll get any real, real closure and answers. But just knowing that he is going to pay for what he's done is going to be enough for me,” said Lindsay Wallsmith of Howard County, Indiana.

Wallsmith drove two hours to see Holycross in court and to meet Bridegroom in person.

"I wanted to support Theresa and I wanted to make sure that whatever punishment he can get he will definitely get it,” said Wallsmith.

Wallsmith says she met Holycross in September on a dating website. She says her first and last date with him lasted three days because he had nowhere to go.

When she finally kicked him out, she says he stole some of her belongings.

"He took an iPod and an iPad, which were both in my room and a 9 mm Glock handgun with 15 rounds of ammunition,” said Wallsmith.

Later she figured out his real name and filed a police report.

Holycross was arrested on that warrant while at Bridegroom’s Mishawaka apartment on February 19.

Bridegroom said she also figured out his true identity – and realized he stole her camera.

Then she found an online trail and she claims it led to women all over the country.

"You know he got away with this for how long? How many years? How many women did he do this to and how many women aren't going to press charges against him? And that's why I am standing my ground,” said Bridegroom.

Holycross' trial has been set for June 6th.

Then he will transported to Howard County to face other charges.