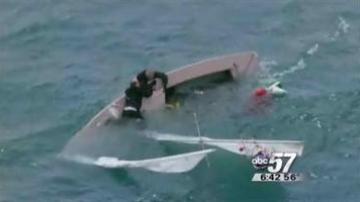 Two men were rescued by a police boat after spending several minutes clinging for their lives on the side of their overturned sailboat.

They were being pounded by choppy, frigid waters. Officials say it appears the two were drinking alcohol before the incident.

They both were taken to a hospital, one was treated for hypothermia. The men are expected to be OK.

A year ago the same boat overturned on the same lake during a storm.