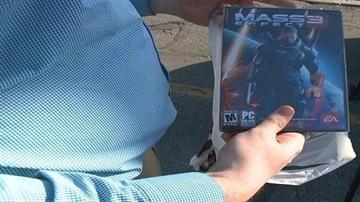 SOUTH BEND, Ind. – Thousands of copies of Mass Effect 3 were sold Tuesday, some to parents buying them for teens too young to purchase them on their own; but what those parents may not know has some concerned.

The first installment of Mass Effect, one of BioWare Corp.’s most popular titles, hit the stands in 2007. Since then, it has generated a huge fan following.

Whether it is the moral choices players get to make when deciding how to save the universe; or whether it is immersing themselves in a fantasy world with all the trimmings of the real one, including romances; or whether it is simply the thrill of battling hordes of evil, and not so evil, bad guys with a variety of weapons at their disposal; fans flocked to game stores like GameStop for the midnight release Monday night.

But it wasn’t until Tuesday that we started catching up with people who were buying the game and not knowing about some of the content it offered.

People familiar with the game and how it worked, were not surprised to find out romance options were returning. Some were even excited to hear about them.

But Brevard was shocked to find out that one of the new romance options for the male protagonist, Commander Shepard, was another male character in the game.

Other long-time fans of the title, like Michael Zieger, were similarly stunned to find this out. However some of them weren’t put-off by it. “Video games have done a lot to make a variety of lifestyles more accessible to the mainstream; and I am very much behind that,” said Zieger.

BioWare released this statement to ABC57:

“At BioWare, we have always wanted to give our players the choice to shape their own, personal story in a wide variety of ways.”

Meanwhile, some parents were not happy to find out about the potential their teen could get access to these concepts. “I wouldn’t let my child buy that; I think there’s enough confusing things in this world right now,” said Tricia Walden.

The parents who felt the strongest said that kind of content didn’t match their faith or family values and the game would not have a place in their home, despite the content in question makes up a fraction of the entire game.

In fact, the only way to access this content is if you specifically try to get to it.

The game itself is rated M17+, which means it can only be sold to people over 17, and the idea is that will keep it out of the hands of kids who are too young, or perhaps should not be accessing that kind of material. If it were a film, it would be rated R.

But the Entertainment Software Rating Board (ESRB) rating is not keeping the game out of the hands of kids that it may be inappropriate for; our reporter witnessed a number of young teenage boys going into the store, with a parent, to pick up their copy.

While the clerks at GameStop are required to inform the parent of the rating the game has, including reading out loud the categories that caused the game to have such a rating; they are not required to inform parents of any specific game content that may be offensive.

Some argue a better, or additional, descriptor should have been “Suggestive Themes,” which is defined as, “mild provocative references or materials,” since sexual preference is still a hot button issue in some circles, and certainly hasn’t reached the same level of acceptance as violence in video games has achieved.

Such a content descriptor may also have led parents to question the clerk what that meant, and could have lead to a better understanding of the content in question. Parents we witnessed buying the game never questioned the rating, until after they found out about the specific content.

On a side note, the creators of the game went to great lengths to keep all of the intimate romance scenes in the game, regardless of sexual orientation, discreet. Only by keeping the scenes non-explicit could they avoid an Adult Only (AO) rating.