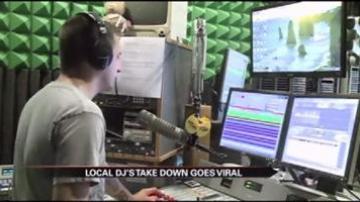 SOUTH BEND, Ind. -- If you're heard the song Same Love by Mackelmore, you know the singer talks about being gay. The song prompted a caller to contact U93 and complain. The DJ recorded his response to the caller and the video has been getting nationwide attention and thousands of hits online.

U93 DJ Artimis recorded the call and it has gotten the attention of the Wall Street Journal and Perez Hilton.

Artimis: You understand that God accepts all people right?
Caller: No. God doesn't love all people.

The caller, Craig or Greg, says God doesn't love the gay tendencies he says are promoted in the song. He says it is America, the land of the free heterosexuals.

Three days later and DJ Artimis is still baffled by what went down over his air waves.

He says he has received a lot of support for standing up to the salty caller.

"Everyone's been great. Tons of people writing in on my page, Twitter followers," said Artimis.

As expected, some people in the area share the caller's sentiments.

"Yeah, some people I guess agree with him but I don't and I don't think anyone in the 21st century should either," said Artimis.

He says he'll keep playing that song because after all, god listens to U-93 radio.

"Heck yes he does, and he'd love Macklemore because God loves everyone and not just straight people. That's ridiculous," said Artimis.

Since the caller only gave his first name-we couldn't track him down for comment. But if you know who Greg/Craig is-tell him to message or call our station because we'd love to give him a chance to speak up.